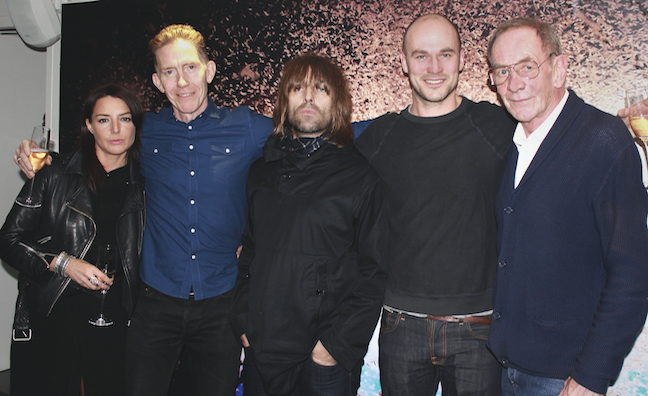 Warner/Chappell MD Mike Smith has hailed Liam Gallagher as "the biggest rock star of the last 20 years", with the singer enjoying huge first-week sales of his debut solo album.

Released via Warner Bros, As You Were (91,890 sales) has sold more than 10 times as many copies as its nearest competitor - Giggs' Wamp 2 Dem (8,975) - according to yesterday's Official Charts Company midweek charts flash.

"Why was I so keen to work with the biggest rock star of the last 20 years? That's a tough question isn't it," said Smith (pictured, second from left). "It was glaringly obvious. I've known Liam pretty much since [Oasis] kicked off and I've always been a massive fan of his.

"One of the reasons why Liam and Debbie [Gwyther, manager] got in touch with me was they knew about my background back in the day as a music publisher and they knew I worked as an A&R guy with a lot of songwriters. They really just wanted to pick my brains in terms of who would be good to put him with and I think you only get good songs for a project when you put people together if the artist is a great songwriter. It's really hard work if the artist can't write."

Gallagher was Smith's first signing at Warner/Chappell. "At the first meeting I made a few suggestions of people I felt he'd be comfortable working with," he said. "Simon Aldred was one of them and I was delighted that two years down the line he ended up being somebody that not only he worked with, but produced some fantastic material with."

The ex-Oasis frontman is equally complimentary of Smith, describing him as a "guy that means a lot, without a doubt". "There are some good people in 'the business', as they say," he added.

Smith is confident that numerous syncing opportunities will arise from the album. "I think there are iconic songs on this record," he said. "Wall Of Glass has already been picked up on a lot on TV over the summer and I've got no doubt that we'll be getting decent sync requests coming in over the next couple of years. I think these songs will stand the test of time alongside some of the best that Oasis have written.

"What's been wonderful is going to his shows and seeing a song like Wall Of Glass up there alongside some of the most famous songs that Liam's ever sung - and getting pretty much the same kind of response back from the crowd."

Click here for more from Smith and here for the full Music Week interview with Liam Gallagher.