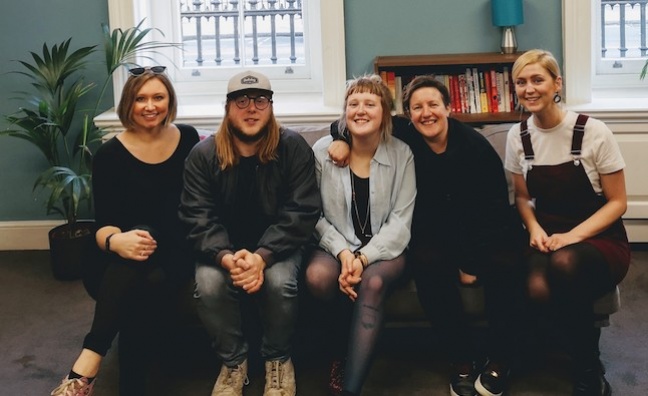 Penelope Isles recently announced their signing with indie label Bella Union. Chlorine, the first single from the band’s debut, was released exclusively to Rough Trade shops on vinyl. The album, Until The Tide Creeps In, will follow in summer 2019.

The band will make their US debut later this month at The New Colossus festival in New York City. They will later join fellow Boy Azooga at SXSW, where they will perform on the BBC Radio 6 Music stage.

“We were actively looking for a new band that write youthful, exuberant indie songs and as if by magic Penelope Isles appeared,” said Lucy Holliday, head of pop publishing/A&R. “Jack and Lily Wolter have that special ability to write instantly loveable tunes with great hooks and an originality that make them a perfect fit for our growing Faber Alt. roster.

“They come with the added bonus of being charismatic and lovely people as well as being on the fantastic Bella Union label, so we're hugely excited about the opportunity to work closely with Simon and Abbey Raymonde as well.”

Simon Raymonde, MD and owner of Bella Union, said: “The team at Faber Alt. and Bella Union have so much in common, not just our love of unique artists, and that has been refreshing for us. As a relative newcomer to the world of pop music publishing, we find their approach to business and collaboration to be perfectly in tune with ours.

“Penelope Isles are a band that we have seen many fall head over heels for over the last six months. The love that Lucy Holliday and Catherine Grieves at Faber expressed immediately on seeing and hearing the band was, of course, infectious. Once Jack and Lily spoke with them, it was very clear to all of us that this was the perfect home for their songs. Abbey and I are thrilled to have been able to help make this happen.”