On The Radar: Amyl And The Sniffers 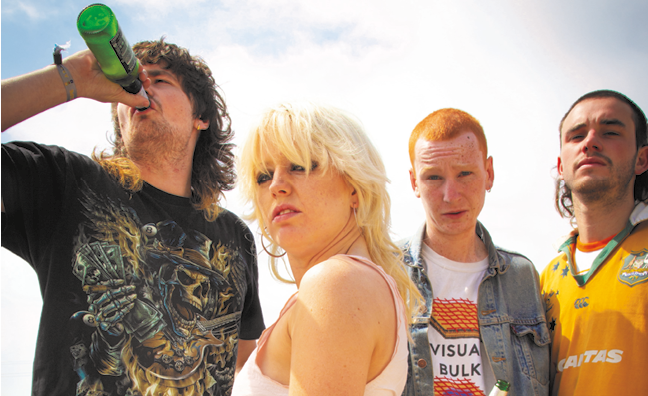 Aussie pub rockers taking on the world with big riffs and mullets...

Upstairs at the Prince Albert in Brighton, Amyl And The Sniffers drummer Bryce Wilson is waggling his tongue upwards in an attempt to halt the flow of blood from his nose. Guitarist Declan Martens breaks off from headbanging to glance backwards and grin, while singer Amy Taylor wields a champagne bottle like a baseball bat, fizz frothing everywhere. Bassist Gus Romer, with the gait of a T-Rex and the frown of a drunk who’s lost his beer money, keeps an ugly rhythm. All four sport mullets of varying length. This is the Sniffers’ first gig outside Australia, and it’s a brilliant mess.

“It was unreal,” says Martens a few days later, before the Melbourne punks play the first of two gigs in one night at Rough Trade East. “The band’s been going just over two years, I didn’t even think we’d get outside our house in St Kilda, it’s gone too far since then.” Chaperoned by Chopper Reid’s former manager and signed to King Gizzard & The Lizard Wizard’s Flightless Records in Australia, these disciples of 1970s Australian pub rock are yet to secure a UK deal. Damaged Goods recently pressed their two existing EPs onto one record, Big Attraction & Giddy Up.

Martens says Giddy Up – its four songs written, recorded, mixed, mastered and released in 12 hours – marked “the start of the buzz”. “I guess part of the reason we came over here was to be the bait and go fishing,” says Taylor. “I’d love to put our own stuff out eventually.”

Taylor, who studied music business for a year, traces her interest back to her employment in a supermarket in her Mullumbimby hometown. “When I left, I said, ‘I want to start an empire’. I love the music industry and shit. Martens, who adores Slade and Status Quo but believes the latter are “too serious”, adds: “I love Martin Scorcese movies. I feel like I’m in the mafia when I’m doing deals in the music industry.”

Amyl And The Sniffers take the piss a lot. A question about their mullets sparks a lengthy diversion that begins with Taylor goading: “We all met on Tinder, I said to them, ‘I’ll give you a blowjob if you cut yourself a mullet’”. But things are getting serious for the Sniffers, who will finish their debut LP after touring America with King Gizzard. They want more of it all. “One of the factors of our success is that we literally didn’t give a fuck, we thought no one would hear us so there was nothing to hold us back from just killing it,” reasons Martens. “Writing our early riffs, I thought, ‘My guitar mates will be impressed’. Now I’m thinking, ‘People in Germany are gonna hear this’. How can I impress them? I don’t know, I’ve never met someone that lives in Germany.”

This band of mates have come this far with personality and talent, now they’re looking to add application to the mix. “We’ve put a bit more work in and the better our songs are, the more gigs we can play, and that seems like fun to me,” Taylor concludes.