On The Radar: Asylums 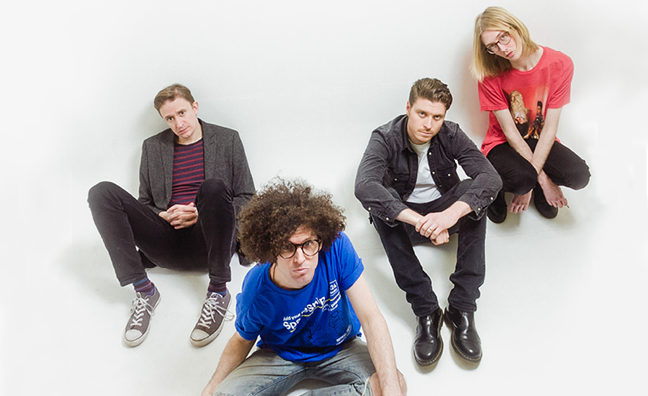 Luke Branch has four jobs. None of them suck. By day, he’s CEO, project manager and A&R of Cool Thing Records, a Southend indie label he co-founded. By night? The DIY exec takes on the mantle of singer/guitarist of rising alt-rockers Asylums. He knows exactly why he’s multi-tasking.“Creative work is what motivates us, not job titles, power or money,” he tells Music Week of both his fiercely independent band and label. “We decided to operate this way so we could manage our situation to protect ourselves and our artists, so we could feel free with the process but also deal in realities.”

It’s something Asylums have been putting into practice since the band – completed by fellow Cool Thing alumni Jazz Miell (bass), Henry Tyler (drums) and Michael Webster (guitar) – set up their own label to release their single The Death Of Television in 2014. Branch recalls their first efforts as “intellectualising” their childhoods – the group reimagining the music, lyrics, films and comics that had inspired them musically. While their “manic alt-rock DNA” has been a constant since their 2016 debut Killer Brain Waves, their just-released second album, Alien Human Emotions, sees them embrace influences like Brian Eno, David Bowie, Father John Misty and St Vincent. Oh, and some interesting perspectives on life. “I had the feeling of looking back at Earth from space seeing the stories playing out below you and wondering if it’s more lonely on your own out in space or addicted to social media down in Swindon,” says Branch of its governing theme.

You can hear those modern tensions on their stirring single Millennials, which Branch says is “both confronting generational stereotypes head on and exploring the collective sense of alienation we’re seeing in the connected generation.” And connecting people is at the heart of everything he hopes to achieve. “We want to be the biggest cult band we can be as Asylums,” he beams. “As a label we want to offer a flexible, transparent and nurturing space.”

It’s an approach that’s already paying dividends. Branch proceeds to reel off a list of the Cool Thing roster’s recent achievements, including, but not limited to, Beckie Margaret’s sold-out show at St Pancras Church and Indian Queens being booked for Robert Smith’s Meltdown Festival. And Asylums are certainly not exempt from that list, either, having recently secured playlist support from Steve Lamacq and media coverage from The Independent. “The campaign’s changed what we thought was possible as a self-financed act,” concludes Branch. “It’s building all the time, you can feel it.”