On The Radar: Boston Manor 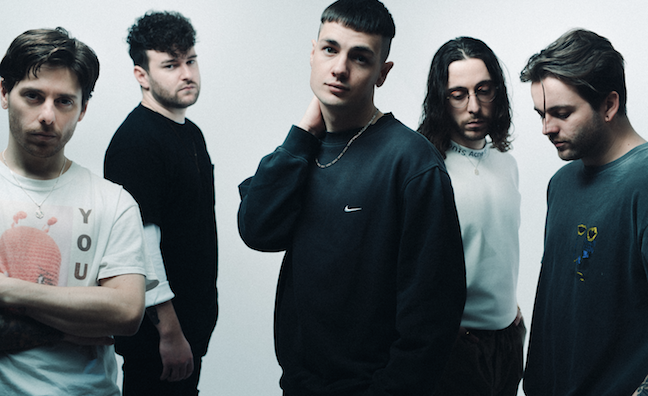 "If you’d have known as a band that this was gonna happen, you could have written the most perfect fucking quarantine record and released it beautifully...”

Henry Cox is considering the notion of an album precision-engineered to drop during a state of pandemic-enforced lockdown. Boston Manor’s singer smiles at the ridiculousness of the idea, yet his band’s third LP Glue arrives in a whirlwind of anger and confusion that draws parallels with the tension currently engulfing the world. How, it asks over 13 tracks, has it come to this, and what can we do about it?

“I think the record suits it, it’s not going to seem out of place,” says Cox, chatting to Music Week from his Manchester home days before release. “It feels fitting to be releasing this at the start of a fresh decade, because most of the record is about challenging people to question themselves, ask more difficult questions and look at the world around them. This time is unprecedented in its challenges for young people and for everybody, every generation.”

Boston Manor formed in Blackpool when Cox moved to the seaside town from Burton-Upon-Trent with his family in 2013. Together with guitarists Mike Cunniff and Ash Wilson, bassist Dan Cunniff and drummer Jordan Pugh, Cox has set about channelling his teenage love of punk (“My thing was being alternative and edgy, I didn’t like ‘indie!’” he remembers) into heavy music that can make a difference. Their two previous records, 2016’s Be Nothing and 2018’s Welcome To The Neighbourhood, charted a course from punk to somewhere more experimental, but now Boston Manor have found their sweet spot. Addressing the rise of the right wing, mental health, masculinity and beyond, the album ignites quickly and maintains a red-hot atmosphere. It’s the sound of a band railing against inertia, urging anyone who’ll listen to do more.

I hope our record galvanises people to better themselves

“Maybe it’s quite angry, but it’s a proactive record, whereas the last one was quite apathetic,” says Cox, who admits to losing sleep worrying about reviews of Welcome To The Neighbourhood. “Really, I just want people to be engaged and feel inspired to start moving forward in whatever way that is. I hope it galvanises people to better themselves.”

In contrast to the personal tumult and uneasy world view that informed the songs, Cox and his band sound sure and true as they burn any remaining bridges to the poppier punk of their past. “I’m really happy we’ve got to this place,” says the singer. “I don’t mean we’re so fucking crazy that we can’t be contained in a genre, but things are constantly shifting. It doesn’t matter how experimental a record we make, because of the scene we came up through, a lot of kids who are into our band discovered us because we were supporting a pop-punk band they liked, so we’ve always been shackled to that genre.”

Cox acknowledges that perceptions of his band can vary depending on the country they’re in and says it has wound him up in the past, but Glue puts paid to all that. Pigeonholing is less pressing a concern when you’re a listener holding on for dear life.

“I’ve let go of the importance of all the tiny details, thinking, ‘We should be doing this, getting this feature and be playing this festival,’” he says. “I just hope we can be consistent and write really good songs.”

To that end, Boston Manor have been hard at work during lockdown, and will emerge with even more new material. And, with hope in his voice, Cox is looking forward to a bright future. “With the sound we’ve started to create, I want to ask, ‘Where are the borders without it becoming shit?’” he smiles.

“I don’t want to start putting in all these elements to make it unconventional for the sake of it. I want to find a way to mature the sound and make music that I can play on stage in my late 30s without looking really lame. I hate watching an adult play children’s music, it’s really embarrassing...”