On The Radar: Cabbage 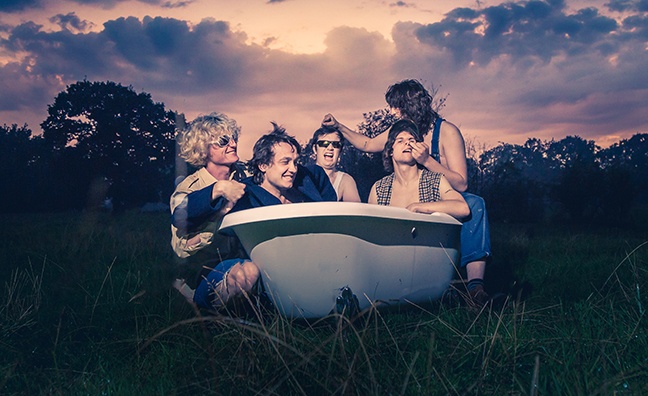 When Cabbage singer Joe Martin answers the phone, the screech of a tram heading towards the BBC’s MediaCity complex in Salford is loud in the background. Martin is with co-vocalist Lee Broadbent, who cracks jokes as his bandmate does the talking.

They’re en route to record an interview for the evening news. Their five-piece band, from nearby Mossey (also home to Melanie Sykes), are the day’s big local story.

This morning, Cabbage were named as one of 15 acts on the BBC’s Sound Of 2017 list, evidence that their Fall-influenced political racket and scantily clad live shows have pricked more industry ears than they’d imagined.

“We’re chuffed,” Martin says. “It shows you’re accepted, I don’t know whether that’s a good thing with the nature of our band...”

His intimation that Cabbage aren’t entirely palatable is easy to understand. They’re a bit of a rabble, all matted hair, roll-ups and Rab C. Nesbitt string vests.

Cabbage are best consumed live, their shows are unpredictable experiences into which they exert every drop of energy. But not everyone’s been going home satisfied. “Somebody moaned in Bolton ‘cause we played for half an hour,” the singer explains.

“But it was only three quid a ticket… When it’s six or seven we’ll do 45 minutes. We’ve got an 11 quid gig coming up in Hebden Bridge, so who knows what’ll happen there…”

The same phrase could be applied to everything about Cabbage. They’re in the studio with The Coral’s James Skelly, and Martin appreciates patronage from other “indie moguls” Tim Burgess, Marc Riley and Clint Boon. It was Boon who hooked them up with SJM, who also manage Blossoms.

It sounds like everything’s in place for a Cabbage assault on 2017, but Martin says they’re aiming only “to stay alive and extend the live shows with performance artists or fire breathers”.

And, while noting “the pearly gates are open”, he says they’re wary of “gossipy industry nonsense” and will gauge success not on sales but “pushing boundaries and making a political point”.

Right now, Martin’s ire is focused on the fact radio stations won’t play Terrorist Synthesizer due to its title. “The news is feeding this idea that we should be at war, which is horrendously wrong. But if you mock that in a song it’s not allowed.”

He reckons it’s “hard” to be angry about Donald Trump’s election due to the lack of a viable alternative, but says, “the popularity of this wrongly patriotic, racist viewpoint is fucking infuriating, it seems the older generation has given up”.

He’s warming up nicely for Cabbage’s BBC interview, and as they near MediaCity, it seems Joe Martin has come full circle. “I studied right near here,” says the former wannabe journalist.

Does he think Cabbage have been well represented in print? “Quite often it’s been great,” he answers. “But one review described us as, meh.

If I’d submitted that at uni it wouldn’t have made it. It’s fucking ridiculous, you can’t describe a band as, meh.” Not Cabbage, anyway…