On The Radar: Crack Cloud 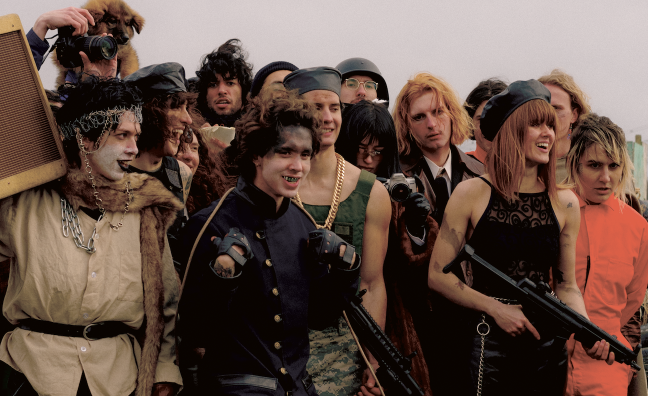 Zach Choy is busy doing nothing. He tells Music Week he’s “smelling the roses and hanging out with my dog,” when we call to inadvertently disturb the peace at his shared home in Vancouver, Canada. Crack Cloud’s drummer, songwriter and de facto leader is chilling because, recently, the sprawling punk collective have been working their fingers to the bone.

“We just finished shooting our last video for the album and it’s been kind of a grind lately,” he says, cheerfully enough for a man who’s absolutely shattered. “We’re taking our time with this one, we’re not in any rush to get it out of our hair.”

Thankfully for Choy and the rest of Crack Cloud (to call them a band doesn’t quite cut it, their ever-changing line-up comprises artists, dancers and filmmakers, not to mention musicians), one thing that is out of their hair is their magnificent debut album, Pain Olympics. Across eight tracks it adds meat and gristle to the post-punk sound of their previous recordings, chucking hip-hop, glossy atmospherics and even some prog into their mix of Wire, Gang Of Four, Talking Heads and Tom Tom Club.

While it’s a great record, it’s an important one, too. Like everything Crack Cloud have done so far, it’s geared towards their salvation. Choy formed the group as a vehicle for his recovery from addiction problems that were initially sparked by losing his father to leukaemia at the age of 11. The rebuilding process is still ongoing.

“Pain Olympics was made and facilitated by people on the fringes, some of us have carried stigmas when it comes to addiction and all of us have a hard time separating the project from our lives,” says Choy. “From the beginning, this has been an outlet for us to get better as people. It’s a programme that doesn’t really end in terms of our existential journey, it’s intense but it’s also a necessity for healing and exploration, we’re incredibly grateful to have it.”

Choy is measured in conversation, in total contrast to his persona on-stage, where he’s invariably shirtless and covered in a mix of sweat and face paint, crashing around behind his drums. Even so, it’s no stretch to imagine that fire burning inside, powering his impassioned statements about his band and their music. Incidentally, he often favours sentences that make it sound like he’s just swallowed a dictionary and would make Jeremy Paxman nervous on University Challenge.

“When Crack Cloud began, post-punk as a jumping off point came pretty naturally to me as someone who leans towards percussion and is, practically speaking, a non-musician,” he says, lining up an explanation of the evolution of the band’s sound.

“But as you do it longer you grow more confident, and for Pain Olympics I abandoned genre as a thing I needed to premeditate on. More than anything, the prerogative was to capture the visual fidelity and communicate on a visual level. It’s audio, but we wanted to create pictures and atmosphere. That kind of visual storytelling often leads to the abandonment of genre, and genre has an attachment to a certain political or cultural insinuation. When you’re not attached to that you can do a lot more.”

The video for the juddering The Next Fix offers a window into what Choy means about visual storytelling, combining explicit portraits of addiction with choreographed dance moves. The band are heavily involved in harm reduction in Vancouver’s Lower East Side, with keyboardist Mohammad Ali Sharar currently working five days a week alongside the city’s addicts.

“Without conflating Crack Cloud and the harm reduction work, it’s the other thing we do that keeps us straight and informed, it never ends,” says Choy.

Such straight-up commitment, not to mention their rabid nascent sound, is what attracted Tin Angel Records boss Richard Guy to travel all the way from Coventry to track the band down and ask to put out their music. In 2018, they combined two EPs for a self-titled 10-song release, and now Pain Olympics (out on Tin Angel affiliate Meat Machine) cements their vision. Their early UK shows prompted a scrum to sign them, but they didn’t budge.

“We’ve always been DIY to the core, so the dream is to build our own infrastructure and to facilitate our own music and our own art on our own terms,” says Choy.

In doing so, they’re making some of the most thrilling new music around. Naturally, Choy has a snappy sign-off to underline the point. “We’re not hinged in any way when we’re making something,” he smiles. “We trust our intuition and our instincts and just go full throttle.”