On The Radar: Dead Pretties 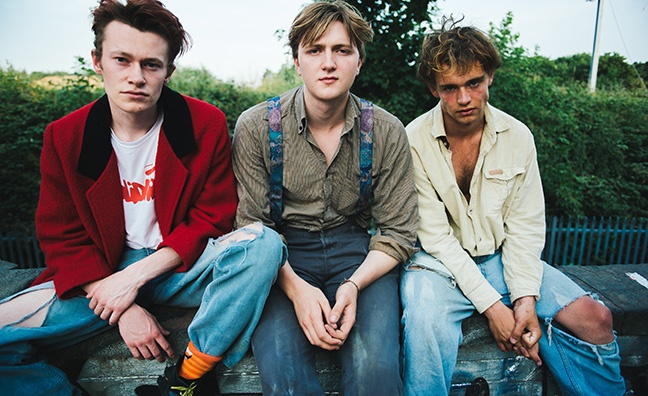 For someone who admits he used to “be a massive loner and stayed inside a lot”, Jacob Slater has plenty to say. In fairness, he says forming Dead Pretties with bassist Oscar Browne and drummer Ben Firth at 17 has gradually coaxed him out of his shell, but our conversation suggests there’s been a mad-eyed rock’n’roll frontman festering inside him for years.

He’s somewhere near Cambridge when we talk, taking time out from the “decadent, shithole space time continuum” he shares with his bandmates in Seven Sisters. We lurch into action at the mention of new single Confidence, a rough and ready attack on disposable news stories. “Why are people so interested in people who lack interest?” Slater spits. “I think people want to be pampered into this stupidity that’s almost a cool thing. I know it’s breaking my own rules to talk about people like the Kardashians, but the concept of why they’re so famous bugs me. We could be talking about literally anything else.”

We take the hint and ask if following debut single Social Experiment - also souped up on vitriol - with Confidence will mean people will come to expect such punked up commentary? “I didn’t say we’re always going to be politically-charged,” comes the vehement reply. “It’s your right as a musician to do what you want. “If people in the music industry bully you into thinking you have to write about one thing, that defeats the whole thing about music really, doesn’t it?” he continues. “Don’t let anyone tell you what to do with your creative output. Don’t belittle yourself with other people’s ideas.”

Dead Pretties certainly aren’t in the business of doing that. Golden Arm, their management company, are, Slater says, “pretty good people” united behind a common goal “to get the music out to as many people as possible”. Their main weapon is playing live, laying waste to small UK venues one by one. An early victim was Brixton’s Windmill, where they gained notoriety for chaotic shows during which the wild-eyed Slater summoned his inner Tom Waits as Browne and Firth battered their instruments around him. “Live is where we flourish,” Slater says, fairly. “Songs sound three times the size, it’s cranked up to 11 in every sense. We just fucking turn up and go as nuts as possible. Why wouldn’t you?”

Dead Pretties shows also incite togetherness; something Slater says is similarly deliberate. “It’s not an elitist thing at all. If you want to come along and let loose then you’re more than welcome.” Later this month, the band begin their first UK headline tour, and Slater is foaming at the mouth with excitement. “I’m looking forward to seeing who’s actually bought tickets. We like seeing what people think, going for a drink and maybe something else,” he says. “If you distance yourself from people investing their interest in you, you’ll crash and burn. You’re not worth talking to.”

Once the nation has been fully terrorised, attention will turn to Dead Pretties’ debut, due next year if Slater “has anything to fucking do with it”. He won’t tell us which label it’s coming out on, but you get the feeling he knows that whichever it is will be in for quite a ride.