On The Radar: Easy Life 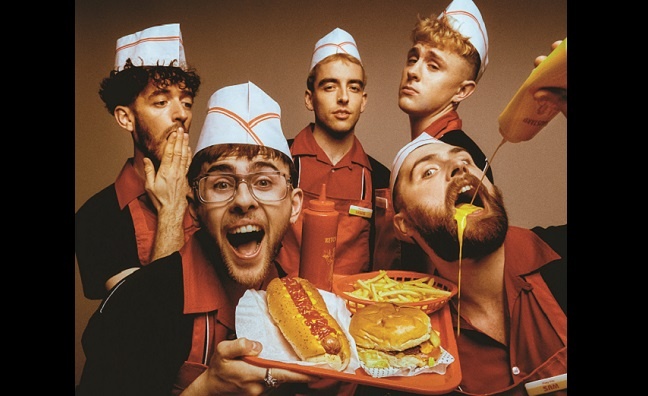 For some artists, music is about sex, drugs and rock‘n’roll, but for Easy Life, it’s about Tupperware. “Some bands will be doing loads of coke and smoking weed, we do absolutely none of that, we just sit in the studio drinking tea and eating lasagne, then leave at five o’clock and go home, read a novel and go to sleep. Honestly man, rock‘n’roll is dead, but I’m embracing that,” says Murray Matravers. Easy Life’s leader sings and plays synth, keyboard and trumpet for the Leicester five-piece, who offer up a dancey, warm-hued mix of hip-hop and jazz.

“At the studio, I usually bring in lunch in some Tupperware and stick it in the microwave, normally lasagne or pasta or curry or something, we do 9-5, man, we’re the most boring band ever,” he says. It turns out it’s not just office drones who indulge in the daily ritual of traipsing to the kitchen and idly waiting for the microwave to ping, bands do it too, and new ones at that. Matravers grew up on an organic cattle farm, and met Easy Life’s saxophonist Sam Hewitt at school. Guitarist Lewis Berry and drummer Oliver Cassidy were in a band together at another local school, while Cassidy also knew percussionist and keyboardist Jordan Birtles. Eventually, they formed Easy Life.

“I don’t really know what we get out of it really,” says Matravers, brilliantly. “It was a bit of a laugh to start with and people have latched on for one reason or another, now we take ourselves slightly more seriously. Music should be fun, an outlet of some sort. It feels limitless with where we can go.” And Easy Life really are going somewhere: boasting 1.2 million monthly listeners on Spotify, they’ve already played Glastonbury, Coachella and SXSW and hit No.7 with their Junk Food mixtape in January. “The mixtape charting was completely ridiculous, mental,” offers Matravers. “It still makes me laugh now. Not many things like that come about that you can hold onto and tell your grandma about.”

Now, they’re busying themselves with their debut album, seeking to distil what their fans love about them into a cohesive whole. “People can relate to [our music]. A lot of it is lyrical honesty, how brutally honest and British we are,” says Matravers. “Instrumentally we’re warm, fuzzy and uplifting, hip-hop leaning projects are usually a bit darker.” Working between producer Rob Milton’s place in Nottingham and Matravers’ house in London, Easy Life are intent on cooking up something good for their debut album. And yet, Matravers sounds bemused by the whole thing.

So, we ask, what is Easy Life’s mission?

“It’s about having fun and documenting our time,” he begins. “It’s not that grandiose. Actually, there is no mission, it’s just five friends making music. Honestly, it’s really quite mundane, but as long as it stays authentic and has that dreary middle England flow, then that’s all we really want.”He eventually admits to having designs on nabbing a Grammy one day, only to backtrack and joke that if they won one, he’d quit: “I’d get a farm, make wool and knit and shit. I’m trying to get back to farming, but I’ve taken a detour.”

But Matravers’ detour with Easy Life looks odds-on to continue for some time yet. “It’s mind-boggling, we wrote all this music in a basement in Nottingham and now people all over the country have heard it,” Matravers says, before heading back into the studio for the evening. “The world can be fucked and you can be upset, but if you get to hang out with your friends and play music, then things are looking up.”