On The Radar: Ezra Collective 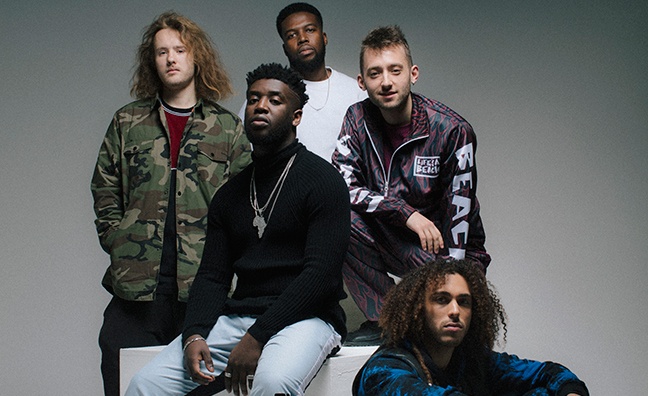 The stigma around jazz music will be fully broken, the image of red wine and sitting down in your best jeans to watch jazz is going to die.” Femi Koleoso never thought he’d be leading a cultural shift when he started playing music with his friends in a London youth club as a teenager, but that’s precisely what the drummer and bandleader is doing with Ezra Collective. Completed by keys player Joe Armon-Jones, bassist TJ Koleoso, trumpet player Dylan Jones and saxophonist James Mollison, the group are about to release their debut album, You Can’t Steal My Joy. It’s an explosion of positivity and good vibes, a hot, humid modern jazz sound touched by Afrobeats and the bassy atmospheres of London’s clubs.

Indeed, Koleoso sees a parallel between the current wave of British jazz acts (see also Shabaka Hutchings, Kamaal Williams, Moses Boyd and Nubya Garcia) and the UK grime explosion. “I grew up in Enfield and Skepta and JME were my heroes,” he says. “I remember the first time I saw Skepta on television, I thought, ‘What on earth is going on?’ And now when you see him on TV or front covers you’re not mad surprised, are you?”

The drummer, who’s touring in South America with longtime collaborator Jorja Smith when Music Week calls, says jazz is coming for the mainstream. “There won’t be the token jazz album in the Mercury Prize list, it will be four jazz records that made it because they were the best ones,” he says. Koleoso’s vision for Ezra Collective took shape at Tomorrow’s Warriors, an organisation set up to develop future generations of musical talent. The band would “bunk school and break into the South Bank Centre to practise”, and the drummer used to sneak into Tinie Tempah and Professor Green rehearsals, soaking up knowledge like a sponge.

Ezra Collective are independent and Koleoso says “the avoidance of any kind of music industry input” has made for “a beautiful process”. He laughs at the memory of “losing money on every vinyl we sold” due to some postage and packing errors on Bandcamp when releasing Chapter 7 in 2016. This DIY approach has fostered a collaborative ethos that sees all Ezra Collective members swap projects, playing wherever possible. Jorja Smith features on the LP, as do Loyle Carner and Kokoroko.

Koleoso can barely contain his excitement. “I just wanted the album to be honest and a reflection of who we are and where we’re at now,” he says. “It’s a positive and happy time, but it’s got the aggression of London and the love for jazz in it, too.” The band are pictured in a sweaty embrace onstage at Koko on its sleeve, and will embark on their biggest ever UK tour in November. They’ve come a long way from the pub circuit, but Ezra Collective only know one way to operate. “It’s never been glitz and glamour with us. We finalised the album at this place in Croatia and I remember knocking on the door and not being confident anyone would open it,” Koleoso finishes. “It was the kind of place where, if you dropped your jumper on the floor, you’d probably leave it there, do you know what I mean?"