On The Radar: Goat Girl 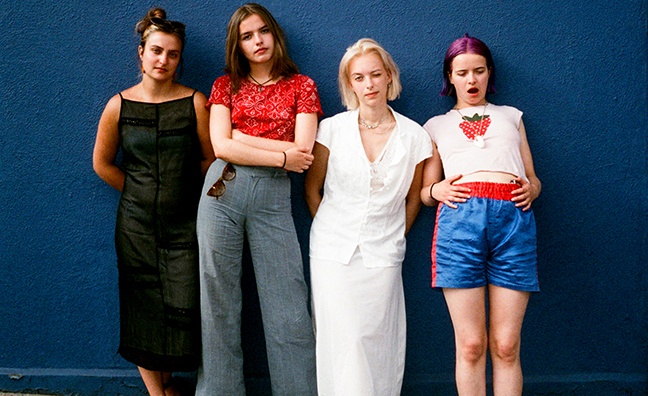 Goat Girl have a gang and they want you to be in it. Entry is free and everyone’s welcome. Based in South London and signed to Rough Trade, the four-piece have spent 2017 signing up as many new members as possible. Speaking amidst the hum and fumes of a busy Streatham High Road, where she’s taking a break from recording sessions at producer Dan Carey’s home studio, singer and guitarist Clottie Cream gets straight to the point. “We’re big on meeting people,” she says. “We talk to fans after shows, they might be doing interesting things like setting up their own gigs that we can play at. I hate when musicians get big for their boots, those relationships are really important. You can connect to people really easily, it’s nice.”

Pressing the flesh has propelled Goat Girl to where they are today. Part of a bubbling creative community, their numerous shows at Brixton’s Windmill caught Rough Trade’s attention and led to a record deal. But to say they haven’t looked back since would be wildly inaccurate. You’ll still regularly find the group - completed by guitarist L.E.D., bassist Naima Jelly and drummer Rosy Bones - creating “special energy and letting out anger” on bills at the Windmill, Peckham’s Montague Arms and various other back rooms in the area. “Those gigs are the ones we enjoy most, it’s home, where we started,” says Clottie. “Tim Perry at The Windmill has enabled bands like us to be known to the public, and his nights are always good so we want to be playing them. We’ll do bigger support tours, but we don’t want people to be left out so we’ll keep doing smaller gigs.”

We’re allowing for issues to be spoken about

Much has been made of the network the band are part of, but they won’t hear of the S-word. “It’s a community making very different music, to label it a scene means it becomes sellable, and that’s when it gets ruined,” the singer says. Home is clearly important to Goat Girl but, by now, their impact extends far beyond South London, even if their humble nature makes them hesitant to acknowledge it. “We never think we’re that good,” says Clottie. “So when it seems like we have fans it’s quite surprising. I really like that people make an effort for us.”

The singer is happier discussing their songs - sharp, furious, political little beasts, submerged in moody atmosphere. Check out new single Crow Cries - online now and due on 7” next month - for an example. “If people listen to your lyrics, why not make them interesting and inspiring?” she deadpans, reasonably. “We’re allowing for issues to be spoken about, you just have to be sincere about it, that’s integral.”

Goat Girl concoct them in their residential rehearsal space, where, recently, their bond has intensified. They want their album, due next year, to bring this connectivity to life, “flowing like one long song”. Being invited in is a tantalising prospect, but then, inclusivity emerges as the precise reason Goat Girl are here. Or, as Clottie puts it: “It’s important for us to have community."