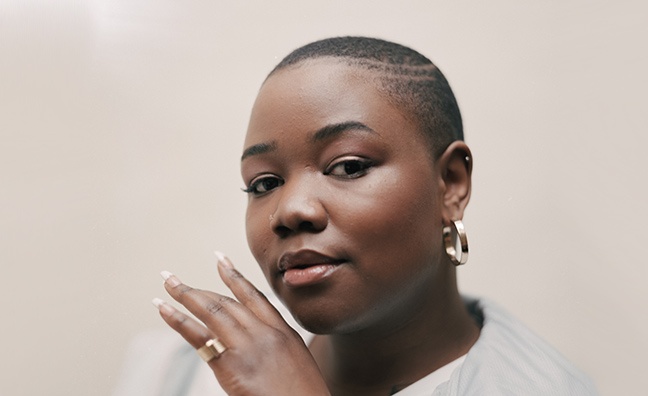 Last October, Hamzaa smiled out from screens across the nation during her performance on BBC Two’s Later… With Jools Holland. Accompanied only by the slow plunk and twang of her guitarist’s acoustic and three backing singers, the East Londoner gave a pristine rendition of You, one of only two tracks available at the time. It wasn’t bad for a first TV performance…

“It’s surreal to be able to say I have been on a show that has broken so many artists,” begins the 20-year-old. “It was a privilege.” It’s one that led Hamzaa, who takes her name from her stepdad’s surname, to a record deal with Parlophone. Represented by Renowned Management (Wretch 32), she’s set to go far in 2019. Last month, she aced her biggest show yet at London’s Omeara. Her debut EP, First Signs Of Me, is out now and a new visual for its opening piano ballad Red is coming soon. “The past few months have been fast paced, but much enjoyed,” she says. “Signing my deal felt just right and it’s been really collaborative so far. I haven’t seen much of the industry I was warned about!” Hamzaa’s favourite feeling yet came on stage. “Selling out Omeara was the best, being in front of people from where I am from is super exciting” she says. “It’s crazy, all the things I’d said I wanted to do are happening.”

It’s no surprise to anyone who’s been following the singer, whose songs glide and float, piloted by her immaculate vocal. BBC Radio 1Xtra’s DJ Target was one of her earliest supporters, and she welcomes the boost: “It’s the dream, isn’t it? People are connecting and reacting to the music, which is due to the door being opened.” The strength of the connection is drawn largely from the emotional candour of Hamzaa’s songs, and she doesn’t know how to write any other way. “I focus on honesty, and from that I guess the songs I write are emotional,” she says, nonchalantly. “I can’t think of anything I wouldn’t write about, I am open to anything.”

Break-ups, mental health and the death of her grandmother have all coloured Hamzaa’s music, and she says Breathing – the EP’s most heart-wrenching track – “showed me the type of artist I wanted to be”. Hamzaa highlights the importance of her practical education, too. “I went to an artist development program for six years in Hackney, which nurtured my writing and performance skills,” she says. She also secured music and drama scholarships at two boarding schools before dropping out of her A Levels, studied ballet and tap and wrote songs for a student performance of Macbeth. Oh, and she opted out of The Voice before filming begun, having smashed the auditions.

All of which makes her eventual organic breakthrough all the more satisfying. Hamzaa just wants to keep going. “My biggest wish is to sell out The O2, Madison Square Garden and to travel the world with my music,” she finishes. “That’s the dream.”