On The Radar: Insecure Men 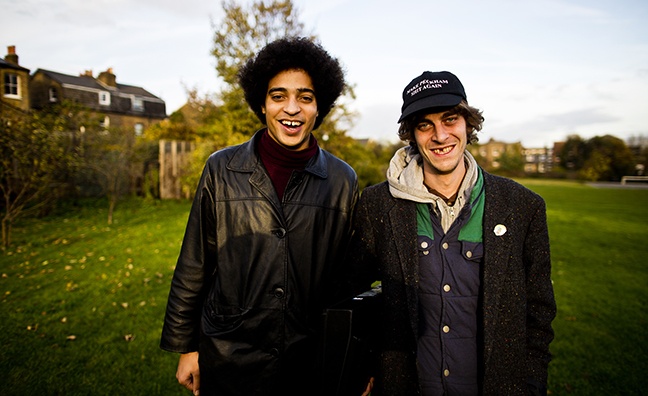 Saul Adamczewski has turned over a new leaf. While on tour in Paris in November 2015, he was booted out of his band, Fat White Family, and landed on a rusty merry-go-round of heavy drug use and listlessness. After rehab, he realised he had a ticket to a happier place: Insecure Men.

Named after a phrase once used to describe the Fat Whites by singer Lias Saoudi’s brother (‘Insecure men who look at their phones too much’), Adamczewski’s new project is a calmer beast. He’s swapped deranged noise for loungey exotica, inspired by vintage ballads and grey British suburbia. Led by Adamczewski and Ben Romans-Hopcraft of Childhood, Insecure Men features a revolving line-up of “between 7-11 members, people with their shit together” including various Fat Whites (Adamczewski is back in the fold) and a vibraphone player known as Steely Dan. The group are already traipsing around Europe and the US playing ramshackle live shows.

“A lot of it’s got to do with working very closely with Ben and him being what’s called a ‘good influence’. I couldn’t do it without him,” says Adamczewski, sounding perky ahead of a solo show near his South London home. “I’m aiming for a healthier, more wholesome life through music. I don’t get the same rush out of playing live that I get from Fat Whites, and that’s quite similar to drugs. You don’t get the same kind of buzz, so you learn just to enjoy it.”

Searching for how best to describe the difference, he settles for this: “If the Fat White Family is like a speedball, this is like a really good cup of coffee.” But Adamczewski’s new songs definitely retain the singular weirdness that’s become his trademark. His group’s self-titled debut, due on Fat Possum early in 2018, is at times like being stuck in a locked fairground staffed by demons, all gameshow twinkles and zombie vocals.

Recorded at Sean Lennon’s studio in upstate New York, the record is a pleasure to get lost in. “One session with Lias, Nathan [Saoudi, Fat White Family keyboardist], Ben and I was probably the best session any of us have ever done,” he says. “We were micro-dosing on acid, so it wasn’t a sober thing, but it was light-hearted, jovial fun. We wanted to make a demented kids’ record, there’s less doom in the sound.”

He’s right. Insecure Men might be mixing drab and dreamy, but Adamczewski is definitely letting the light in. Not that his outlook on where it could take him gives that impression, mind. “I’ve given up on ambition and stuff like that. I don’t have any thoughts on the music industry, to be honest,” he says. “I hope people like it, Ben and I have already written another record. The ambition is to keep moving.” For now, Insecure Men are sharpening up their live show before touring hard next year.

Does Adamczewski have a parting message for anyone interested in coming to see them? “Er… No.”