On The Radar: Ivorian Doll 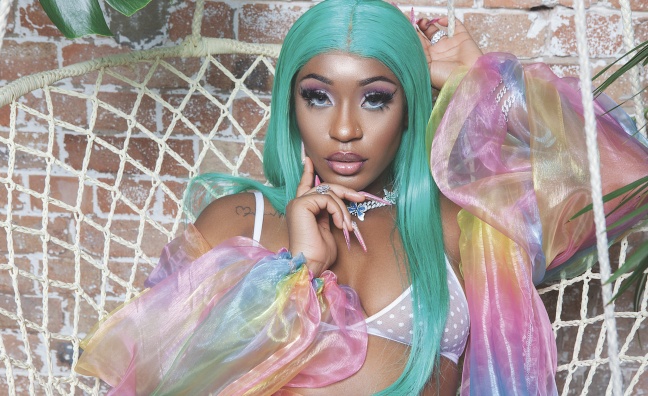 Ivorian Doll calls Music Week from her home in East London in the midst of a hectic studio schedule and she’s weary. But the rising rapper (real name Vanessa Mahi) is also tired of the lurid whispers that surrounded her love life earlier this year as she tried to get her solo career off the ground.

“A lot of rumours were being spread about me,” she begins. “And whenever I tried to put out a song people were like, ‘Are you ever gonna address it?’ So I thought, ‘Let me just address it before I can pursue this music, because clearly people don’t really forget about things’.”

The gossip was tough, but Mahi hit it head on with Rumours, a ferocious drill track that dropped in the midst of lockdown and quickly accelerated her career. With almost four million Spotify streams already, it shows off her uncompromising rapping in some style (“I heard a rumour she banged half the block”, goes one line).

“It was kind of sad for me,” she says. “But when you show you’re addressing your problems in a fun way, it can affect other people like, ‘Oh, she’s so confident, and if she can get through it, so can I’. Being a female in the music industry is hard enough,men can glorify, like, sleeping with many women and no one says anything. But when a woman does it, it’s like, ‘Oh, she’s a ho,’ and I just don’t understand.”

Standing up and empowering women are part of Mahi’s manifesto. She’s sick of “beefing problems” and wants to see more collaboration between female artists. But she’s also ready to be on top. Rumours was quickly followed by Body Bag, a raw track with a deafening beat to ward off anyone that tries to steal her thunder that came complete with a Kevin Hudson-directed video worthy of the big screen. “With that song, I was in the mood of trying to get to the top,” she says.

Growing up in Hackney, Mahi was surrounded by the growing drill scene and has been rapping since a young age. “I was writing lyrics for my friends and was always doing fake rap battles with other schools,” recalls the MC, who started her career as a YouTuber, sharing stories about her life, before she released her first tracks The Situation, and Spare Me alongside Abigail Asante. Citing her feisty Sagittarius side, Mahi quit to go solo in 2019 and hasn’t looked back. Recent endeavours include a Daily Duppy for GRM Daily and guest spots on Headie One’s Edna opus and Br3nya’s Beserk.

Now I want to show how versatile I am

“Music is life-changing when you’re doing good,” she says. “I started seeing that I was able to do things I couldn’t do before, like moving out and looking after my parents, so this is obviously going to continue because my life’s getting better!”

The self-styled Queen Of Drill might have only just conquered the genre, but she’s already keen to leave it behind. “I love drill, but the female rappers I look up to and I aspire to be are not drill-type people,” she explains. “I did drill to make my way through to other genres, it’s such a male-dominated field and I saw that not a lot of females were doing it so I was like, ‘OK, let me just quickly slide in there!’ Now, I want to show how versatile I am.”

Mahi is looking to her favourites, Nicki Minaj and Megan Thee Stallion, to inspire her next move. And she’s confident in her redefined sound.

“It’s very [much] radio music – fun music,” she says. “When I first started out, my sound wasn’t as good as it is now. My cadence, delivery and confidence have changed. It’s an exciting journey and I can’t wait to see where it goes. I want to be an international artist and have a hit record that travels all over.”