On The Radar: Larkins 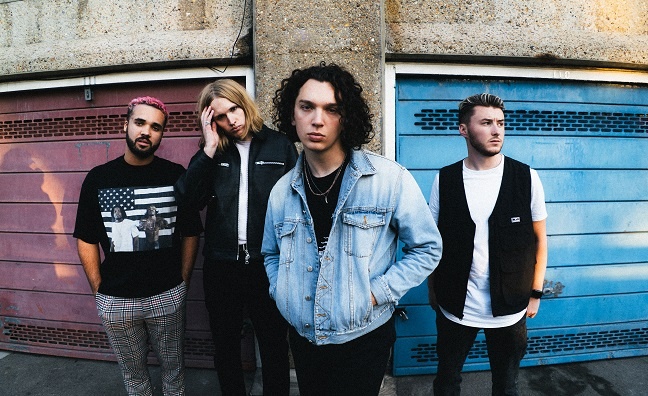 The industry is crying out for a young band, that’s what’s missing. Bands used to be sexier, cooler, more individual, things can be calculated now…”

Larkins singer Josh Noble might have had a late night, but he’s on fine form when Music Week finds him at home in Manchester, messing around with some new demos. In fact, our conversation goes some way towards anointing Noble as the latest in a lineage of motormouth musos from the North West, and he’s totally cool with being a mouthpiece for the band, completed by his old school mate Dom Want on synth and guitar, plus their classically trained rhythm section, bassist Henry Beach and drummer Joe Gaskell.

“My favourite bands have those people, I’ve always been excited about being that kind of person,” he says. But Noble is wary of fabrication, too. “Sometimes you end up creating an ego that can be a person that you’ve always hated. That person can be a bit of a dick, so you really have to split that from who you actually want to be. Being ‘outspoken’ is a weird one, with some people it’s so forced and contrived.”

The industry is crying out for a young band

Noble hopes that Larkins – who trade in glistening indie anthems and have strived for arena standards since their beginnings playing in crummy pubs – can define a musical era. He’s excited by the possibilities, citing Billie Eilish’s Grammys clean sweep as validation for extraordinary music. “Music is still as exciting as it ever was,” he says. “This band is everything to us. At the start, I would look at other bands and try and work out whether they were into it as much as me, I’ve still not found anyone at our level. We do it tirelessly.”

When Larkins moved from outside Manchester into the city, they’d be at a gig every night, mining for tips and tricks so they could work towards eclipsing the competition. They’re trying to turn what they do into a community, something for kids to live and breathe. Fed up with crappy merch, they started making their own, an eco-friendly operation that has since grown into a clothing line called Animals In Costume. “People want to be invested in stuff they believe in, that has a moral code to it,” says Noble. “That really excites me.”

Larkins are formulating plans for their debut album too, with Noble keen to push the boundaries established by their fluorescent breakout single TV Dream. “We want to find a gap and jump into it, to push fans with songs. It’s cool to release music and get nervous about it,” he says.

There’s touring at home and in America to do first, though. Noble pays homage to The 1975’s stage show, and some have likened his band to Matthew Healy’s. They’ve even got matching mops of dark hair. But he’s not bothered: Larkins just want to get on with being massive, forever. “Lots of bands tour and just want to get through it, I would never, ever want that,” he says. “No one could ever leave this band, it just couldn’t happen.”