On The Radar: Lauran Hibberd 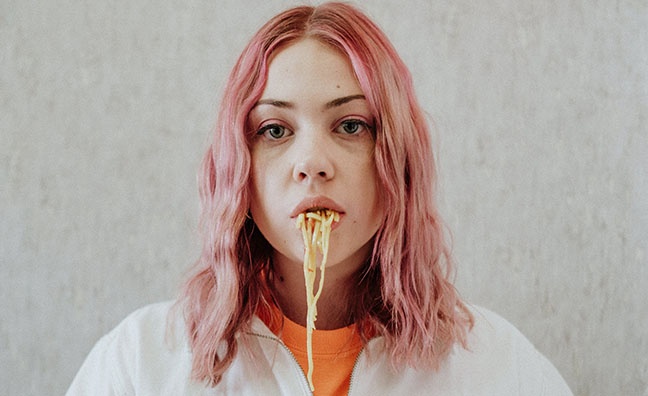 A couple of months ago, Lauran Hibberd’s Tuesday afternoon was interrupted by a phone call from BBC Introducing. They had some important news. “They said they wanted me to play Glastonbury, I thought they were joking,” Hibberd remembers. “I said, ‘What, who is this, it’s a Tuesday afternoon what are you talking about?’”

The singer and songwriter is talking to Music Week from her home on the Isle Of Wight (“Everyone’s so happy, I know all my neighbours’ cats’ names”), where she writes songs that pop like Rice Krispies, mixing bizarre lyrics with buzzing guitars. Hibberd enjoys skewed humour; chomping noodles for the camera and choosing to sit under the hand drier in her local public toilet for the cover shoot for recent single Hoochie. “That’s what I’m like as a person,” she says. “You sit in your bedroom, write songs and then it becomes something and people start calling it a career. Then all of a sudden you’re playing Glastonbury!”

She’s giddy at the prospect, excited to attend one of the world’s most famous festivals for the first time. In previous years, she’s hadn’t even managed to get tickets. “I don’t think I’m prepared!” she says. “I’m ready for some mad walks and lots of mud, mainly I want to see as many bands as possible.” With Sharon Van Etten, Billie Eilish, Miley Cyrus and Pip Blom on her hitlist, Hibberd is in for a busy weekend, not to mention sets for PRS For Music and Greenpeace. “For an up-and-coming artist it’s an amazing place to be, you’re in front of loads of new people,” she reasons. Her predecessors on the BBC Introducing stage include Florence + The Machine, and the prospect of headlining one day strikes Hibberd like a lightning bolt. “It’s super scary and overwhelming. At this point, I’ve got a lot to prove. I try to take each day as it comes otherwise my head would explode,” she says.

The hard slog of gigging and writing (“I write two songs a week, I always have”) is bearing fruit. Hibberd is working on her debut album, but there’s a new EP to come first. “It’s called Everything Is Dogs, it makes absolutely no sense as a title or a concept but we’re rolling with it anyway,” she says. It will mark her first physical release, a 12” manifestation of another landmark moment. “I’m very excited to be able to hold something that I’ve created. It’ll be really nice,” she says. With more touring scheduled, Hibberd is set to carry on living her dream. To be able to call music a career, she says, is “mindblowing”.

“It’s great to [write songs] that take something small and stupid and spin it into something dark and comical,” she finishes. “I probably have 80 million tracklistings for my album and it doesn’t even exist yet. But I’ve started creating it in my brain…”