On the Radar: Let's Eat Grandma 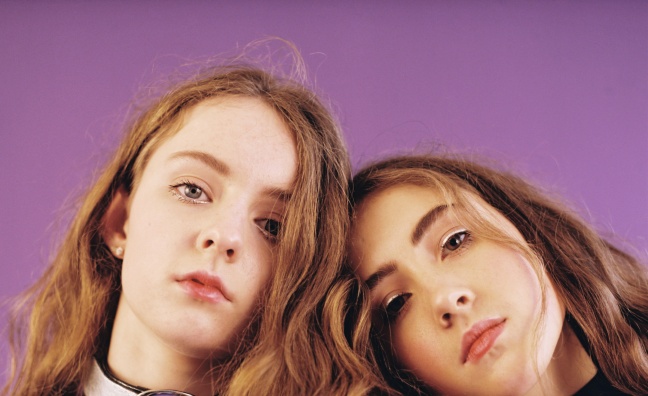 Let’s Eat Grandma’s Rosa Walton and Jenny Hollingworth say the same things simultaneously – or within a split second of each other – and are a rare duo who can actually finish one another’s sentences. But despite the name of their debut album, I, Gemini, and the fact they’re both 17 years old, they aren’t twins.

The Norwich twosome do have other things in common though. Both, as Walton points out, had classical upbringings. “Jenny’s mum plays the harp and my dad plays the viola,” she tells Music Week. “We were both raised on mainly classical music. It’s been a bit of a weird influence.”

“I think my mum actually banned pop music at one point,” adds Hollingworth.

Both are multi-instrumentalists, with Hollingworth classically trained in recorder, while Walton is the main glockenspielist in Let’s Eat Grandma. The experimental pop of I, Gemini features everything from the saxophone to the harmonica, with synthesisers, drums and the mandolin thrown in for good measure.

Classical music has certainly played more of a part in the band’s sound than you might otherwise expect. “Especially when you look at what’s happening in more contemporary classical music,” Hollingworth explains.

“We listen to a lot of older classical music, but as things have developed, you’ve got stuff going on like surrealism, which isn’t everyone’s cup of tea, and then minimalism and stuff. We take influence from those kinds of things.”

Of I, Gemini’s genesis, Walton recalls: “We wrote most of the tracks when we were 13 or 14. We were kind of shoving in recording during the school holidays, whenever we could basically. So it took quite a long time.”
Indie label Transgressive got involved through the artists’ previous management.

“This cool guy called Kiran Leonard saw our band name on a poster. Shout out to Kiran Leonard!” says Walton. “So he thought, What the hell is that? He went home and googled us, and we had some really crap demos up - they weren’t even demos, they were just videos of us playing live that we’d put on YouTube. He introduced us to his manager at the time.”

You might have seen Let’s Eat Grandma gracing Music Week’s pages with a comically large cheque, presented to them after they signed Transgressive. Walton deadpans that they’ve spent it “all on sweets”, before adding: “That was a joke mocking the fact that we’re always told that we’re kids. It feels like we’re a bit underestimated.”

Hollingworth notes: “I think it’s because we’re not a male band with a female front, or just not an
all-male band. And also because our music’s a bit weird, we automatically get put in the kooky girl group stuff. The Bjorkists.

“I guess it’s important - you have different narratives to write about. But it doesn’t change the way that you write music, really.”

Jokes aside, they may well be more mature than your average 17-year-old; that shouldn’t influence your opinion of their music though, and they definitely shouldn’t be underestimated.

Nor does their age mean they need to be excessively sheltered from the darker areas of the music biz. Walton says: “I think people often feel protective towards us, but we’re quite good at spotting things ourselves that aren’t particularly good.

It’s so easy to get exploited by companies, for example, like if you work with somebody to promote something and they won’t pay you.

“People ask us because they think they can get away with it a bit more, but we do notice. It doesn’t go over our heads.”