On The Radar: Lil Nas X 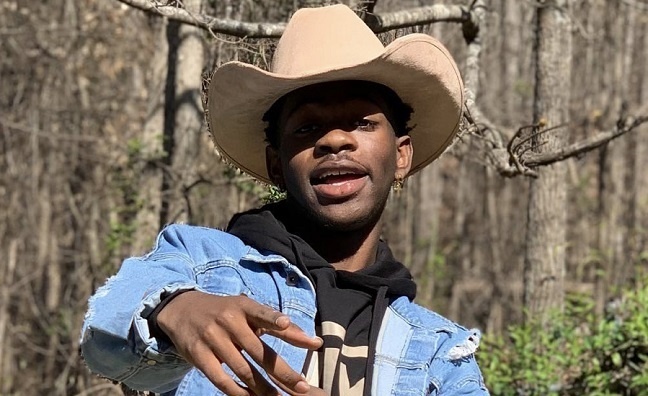 I believe I am in West Hollywood…”

Lil Nas X sounds cool as hell as he fills Music Week in on his whereabouts on a sunny California morning. The night before our interview, he eased through his first live performance, alongside Billy Ray Cyrus and Diplo at Stagecoach Festival, Coachella’s ‘country cousin’ that attracts 75,000 people each year. In stack heeled boots and Stetson, with the tassels on his jacket flapping in the breeze, the Atlanta rapper breezed through Old Town Road, his viral country trap smash hit. “Last night, man,” drawls the 20-year-old. “It was my first performance ever and it felt great, I could feel the energy.”

Performing alongside a country legend and one of the biggest DJs on the planet isn’t bad for a first gig, but then, everyone wants a piece of Lil Nas X. Born Montero Hill in April 1999, he attended Lithia Springs High School and quickly became obsessed with music. His dream would lead him to drop out of education altogether and Old Town Road was written in desperation, as he kipped on his sister’s floor to avoid going home to face his parents. Built around a beat featuring a Nine Inch Nails banjo sample and downloaded online for $30, the song was released in December 2018 and went stratospheric via a very deliberate meme campaign. It hit No.1 in America and the UK and has 258,282 sales (OCC) and more than 171 million Spotify plays. The Billy Ray Cyrus version has almost 126m, while lyric and unofficial videos are racking up millions more on YouTube. Indeed, the rapper is deep into the official video shoot when we speak.

“It feels like what I’ve been telling myself was coming is finally here and it’s a sigh of relief,” he says. “I believe I’m at a new level, I don’t need to focus on numbers anymore, I know they’re going to come. I focus on what’s next.” Now signed to Columbia/RCA, Lil Nas X is, unsurprisingly, still coming to terms with things. “It’s every second I’m breathing, it’s not like it leaves my mind, it’s constant,” he says, sounding dazed. “I’m enjoying it and making sure I can take it to the next level.”

For the record, that means “modelling, acting, designing and fashion”. Lil Nas X is dreaming big, and he believes his emergence marks a new dawn in the music industry. “I knew [going viral] was my best shot, I was very aware,” he says. “I believe there will be a lot of attempts to imitate it, but if people do that’s great for them.” Even the controversy that exploded when Old Town Road was deemed ineligible on the country chart in America hasn’t dampened his spirits. “The song became about controversy maybe, but it also helped people discover it, so it was a win and a lose in my mind,” he says. “But, overall, it happened and the song is even bigger…”

Before we leave him, Lil Nas X lays down just why Old Town Road is so powerful. “It paints a picture and allows people from any place to just join in and feel a sense of togetherness,” he says. “It’s different from a lot of stuff that’s out right now and it’s funny, catchy and short. It is what it is…. It’s crazy.”