On The Radar: Meet Me @ The Altar 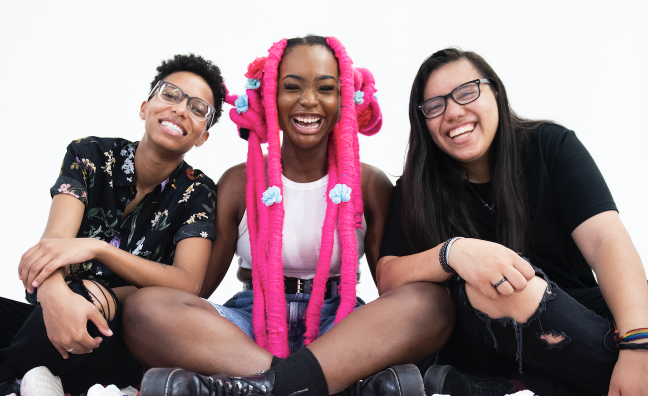 For some of us, being stuck at home while the pandemic rages on outside can be tedious, but not for Meet Me @ The Altar. The pop-punk trio – comprised of guitarist Téa Campbell, drummer Ada Juarez and lead singer Edith Johnson – have just moved in together, and they’re buzzing about it. Having formed remotely via YouTube and text message while living miles apart in Florida (Campbell), New Jersey (Juarez) and Georgia (Johnson), you can see why.

Settling into their place in Orlando, and with the ink still drying on their record deal with Fueled By Ramen, they’re lazing by the pool when Music Week calls. With their fireball new single Garden doing well, merch is flying out and the band are responding to messages from fans. There’s a mobile number in their Twitter bio and they’re currently inundated with pet photos, after Juarez prompted fans to send them in.

“This is a dream come true for all of us,” begins the drummer. “We grew up listening to this music having nobody that looked like us on stages, but we still made it! We want to be the ones to inspire the little brown girls everywhere to go out there and make music.”

And Meet Me @ The Altar (whose name is from a conversation via text between Juarez and Johnson) are surely one of the most inspirational new rock acts around. Their story began when a 14-year-old Campbell was at home burrowing down a YouTube covers wormhole, and she came across Juarez bashing through Holding On To You by Twenty One Pilots, now their labelmates. Within a week, they’d decided to start a band, recruiting Johnson after they held auditions for a singer. Despite being separated, they formed a friendship and wrote songs, shaping their frenetic sound. Tracks like Garden and May The Odds Be In You Favour fizz and froth, overflowing with energy.

We had to put aside our fears of not fitting in

“Honestly, when we first started this band we knew that we had something special,” Juarez smiles. “We always had the motivation and the drive to go above and beyond to get to where we are now. We’ve always had confidence.”

Dumping audio files in Google Drive and exchanging reams of text chat, Meet Me @ The Altar quickly hit their stride, setting out on a mission to change the face of the pop-punk scene that birthed them.

“The entire history of the world is very white male-dominated and the scene is no exception, but it doesn’t have to be that way,” says Campbell. “We had to put aside our fears of not fitting in and being hated in order to write and perform some sick-ass music. We know what we signed up for and we’re willing to face all of that so that the kids who are thinking about starting bands don’t have to.”

Meet Me @ The Altar are determined to see more and more young people following in their footsteps. “We are three normal kids who worked our asses off and put our hearts into every single aspect of our band,” Campbell continues. “Famous people say it all the time but it’s so true: if it can happen to us, it can happen to anyone. If you put in the work, you will reap the benefits.”

The guitarist also argues that 2020 will prove a watershed moment for not just pop-punk, but rock as a whole.

“Coming out of Covid, the scene is going to be a lot different,” she says. “There is no tolerance for abuse, racism, homophobia, transphobia or any of that. It will take a lot of willpower to transform the scene, but we’re hoping to inspire all of the kids who felt excluded to feel comfortable and safe at shows. Our vision is for kids to not have to grow up thinking that they’re not cool for listening to ‘white people music’ while simultaneously feeling like they can’t see their favourite artists live because the scene won’t accept them.”’

And while Juarez says it’s “scary to be young in America right now” as the election looms, Meet Me @ The Altar only see positivity ahead. Really, it defines the very essence of the trio and their unruly, addictive sound.

“Our new music is a step up from anything we’ve ever made,” says Johnson, looking ahead. “We’re often told that our music is very nostalgic. We’ve somehow managed to write new stuff that sounds ever more nostalgic than anything we’ve released so far! It’s still fun, exciting, and mosh-worthy, but also more mature and grounded. We’ve grown up, but in a fantastic way.”