On The Radar: Milk Teeth 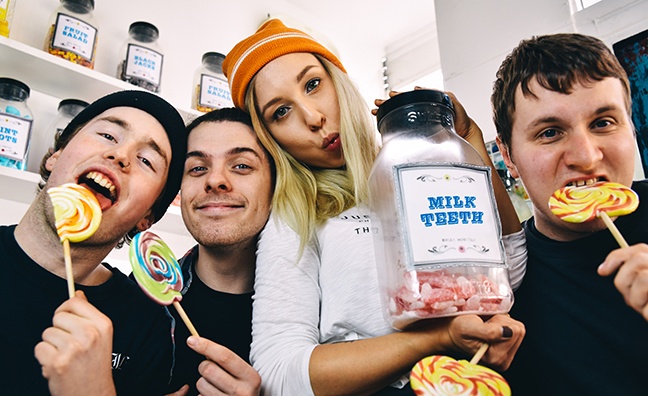 Cheltenham venues The Frog and Fiddle and The Two Pigs, open mic nights, house parties and a waffle house. These are the kind of places Milk Teeth played in their infancy. Infatuated with the ‘90s (and grunge in particular) they formed in Stroud around four years ago, where they’d get lifts to rehearsals at Base Sound practice space, owned by their mate Howard from music college. They filmed their first video, for Vitamins, there. But as we roll towards the summer of 2017, those days are all but consigned to history. Milk Teeth - made up of singer/bassist Becky Blomfield, guitarists Chris Webb and Billy Hutton and drummer Oli Holbrook - have signed to Roadrunner Records, and will soon release their major label debut EP, Be Nice.

Led by pop-punk battering ram Owning Your Okayness, it’s jammed with melodies, sugary choruses and guttural guitars smudged with emo, punk and, yes, grunge. Catnip for teenagers, basically. Oh, and food for thought for grizzlier rockers. With another EP set to follow later this year, there’s only one place to begin our chat with Blomfield. “It’s a very exciting time for us, with the single, EP and signing,” she says. “You always get the fear before putting new things out and think, Is anybody going to care? But so far, so good.”

Her slight mitigation leads into our next question. Have Milk Teeth sold out in moving from Hopeless Records, who released 2016 debut album Vile Child, to Roadrunner? “When people consider progression as selling out, how is anybody going to move forward? Or have a career?!” she says, her incredulity almost turning into a scoff. “How can being on one of the best rock labels be considered selling out? To us it’s a great achievement, we’re super happy about it. Everybody has an opinion but you have to take it with a pinch of salt. We’ve worked our arses off, playing shows, driving all night and then getting up for work again. We’ve put in time and effort because this is what we wanted, I see nothing but positives in this.”

That’s that sorted, then. Equally positive is the message that Milk Teeth are intent on sending out. Chiefly, that Blomfield’s articulate, personal lyrics are there to latch onto. “Initially, it’s getting something off my chest so I can process it,” she explains. “When someone connects to it, it takes on more meaning and becomes hugely rewarding. It makes me feel less alone, and I hope that makes a community of people feel less alone. If I was writing and people felt no connection, good or bad, I’d almost feel like I didn’t have a purpose.”

It’s blatantly clear that Milk Teeth, a young rock band who respect their elders while being unafraid to embrace pop, do have a purpose. They want to be an example to other nowhere kids. They want to quit their day jobs. They want to be a career band. They want it all, for real. “We’re not ashamed to say, we’d love to play Wembley or do an arena tour, that would be incredible,” Blomfield finishes. “I think that there is a big difference between being ambitious and being cocky. We are definitely ambitious, but still quite humble!”