On The Radar: Moses Sumney 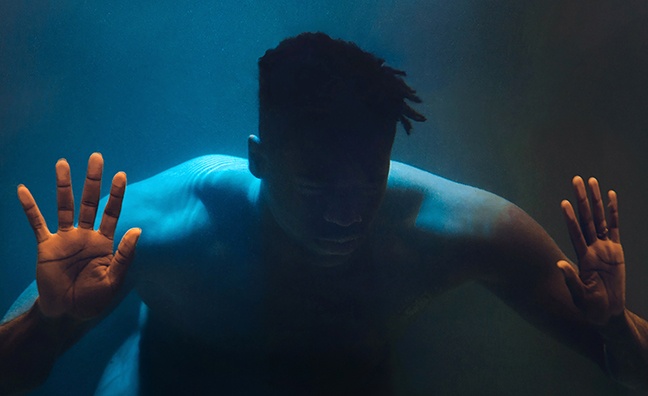 About two years ago, Moses Sumney was sailing across the Pacific Ocean on a cruise liner with a select group of the world’s foremost marine biologists. Recent Jagjaguwar signing Sumney, known for trippy, sad and atmospheric anti-pop and working with Solange and Jamie xx, was there to provide “brain breaks” for the assembled scientists. The experience was as strange as it sounds.

“It was kind of isolating,” he says, sitting at a picnic bench in a shady corner outside his label’s London office. “I was holed up in my cabin a lot of the time, we were on the boat for a week and I only sang on the last night. So I basically just got a free trip around the Pacific Islands.”

It sounds like nice work if you can get it, but Sumney wasn’t just lazing idly. His spare hours were largely spent working on songs for Aromanticism, his upcoming debut album, a concept piece exploring lovelessness and questioning the idea that it’s ‘normal’ for us to find a partner.

“I was thinking of the idea without really knowing what it was,” says the singer, who was born in California to Ghanaian parents. “I looked up those feelings and ideas and came across the word ‘Aromanticism’ and thought, Oh, this is what I’m interested in.”

His self-produced record and the thinking behind it are extremely well suited to isolation, and it’s no surprise to learn the biologist-packed ship wasn’t the only place Sumney hunkered down alone. Once he’d settled on the concept, he upped sticks from Los Angeles immediately. “I got a little cabin in Carolina and lived there alone for a month. I wrote about 20 songs, some of which ended up as bridges or stepping stones towards the ones that did make the record.”

As a new Jagjaguwar signing hiding in a cabin to work on his debut, Sumney is following in the footsteps of Bon Iver, and his music shares a cracked quality with Justin Vernon’s.

“I’d start a song and finish it in the mountains. I never wrote lyrics with anyone else,” he says. “I wanted the album to sound like one person, but maximising the abilities of what one person can do.”

That’s not to say that Sumney closed the door to the outside world completely: Majical Cloudz, Thundercat and Son Lux are among his collaborators, all handpicked to fill specific roles. The result is an immersive record, setting fragile lyrics to lush musical backing. It’s an impressive body of work, an exhibition of the music its author has been coaxing forth since temporarily moving back to Ghana from America aged 10.

“I always wanted to be a singer and songwriter and started writing when I was 12 in my room with the door locked,” he says. “I was very shy, quiet and a bit repressed, but when my best friend told me he’d written a song, I knew I had to do it too.”

As it turns out, his friend was lying - he’d printed out Westlife lyrics and passed them off as his own. Rightly, Sumney smiles at the memory - he’s come a long way since then.