On The Radar: Pale Waves 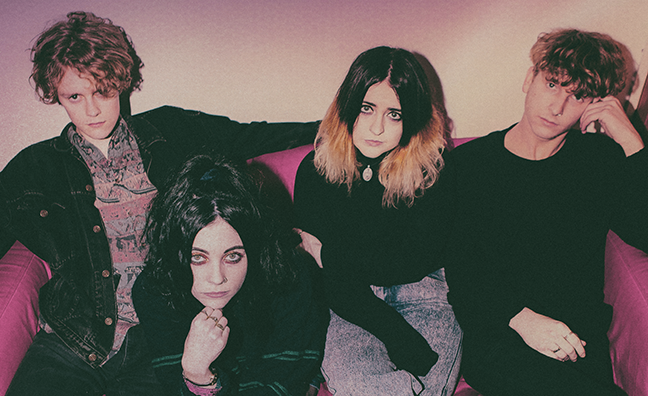 Heather-Baron Gracie is in a service station car park, somewhere between Glasgow and Manchester. It’s Monday morning and she’s just had a veggie bean burger from Burger King. The van had to make an unplanned stop for queasy guitarist Hugo Silvani.

“I needed some stodge,” says Gracie, Pale Waves’ singer and guitarist. Her band, completed by best friend and drummer Ciara Doran, Silvani and bassist Charlie Wood, are three days into their third ever tour, a 17-date run with Dirty Hit labelmates Superfood and King Nun.

It’s your classic, no-days-off tour of sticky-floored indie dives, and Pale Waves are elated to be a part of it, hangovers or no hangovers.

“We’re still babies, pretty much,” Gracie says. “Our longest tour so far is seven weeks, so we need a lot more experience.”

They’ll certainly get some over the next few months; after their current UK run finishes, they’re off to America for the first time to open for The 1975. You know, Dirty Hit’s arena band.

Matt Healy’s wine-swilling miscreants are the label’s daddies, a success story to inspire the younger bands founder Jamie Oborne and his small team are signing.

Not only that, frontman Healy and drummer George Daniel are getting behind the glass for their labelmates’ studio sessions, too.

They co-produced The Japanese House’s Swim Against The Tide EP last year, and they’ve buffed up a glorious shine on Pale Waves’ upcoming debut single There’s A Honey, which splices indie shimmer and funk groove for a knee-weakening pop mix that’s equal parts Madonna, The Cure and The Sundays.

It’s slathered in a boldness that suggests it’ll make as much sense to toilet circuit crowds as it will to droves of The 1975 fans in much larger American venues.

“I just want to give people great music. I’d be disappointed if our album doesn’t get to No.1. You’ve got to aim high haven’t you?”

She describes working with Healy and Daniel as “amazing” (something of a Pale Waves buzzword, it seems).

“They’re so passionate and they just want to make amazing records. They’ve been through everything, so they can tell us, Watch out for this or, Make sure you don’t do this. They’ve basically said, Do your own thing and always stick to your guns.”

It seems Pale Waves have done just that since Gracie met Doran at music college in Manchester in 2014 and invited her to play drums on a few of her songs. “We’re the perfect partners,” she says. “We’ll probably still be developing our sound in 10 years’ time, it just evolves.”

Having moved out of Manchester after studying, the pair are now based in Doran’s family home in Stoke, spending hours in their tiny studio there (“There’s a Pale Waves T-shirt on the wall and it’s pretty mad and messy, but it’s cute”).

Inside, they’re cooking up material to match some pretty serious ambitions. “You know those certain songs that define an era or a moment in your life?”

Gracie says as the van doors close. “It would be amazing if we could do that. We just need to carry on and hopefully people will attach to it…”