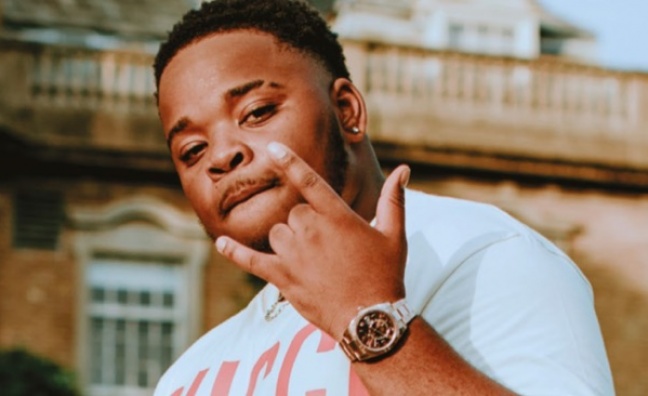 "I want to be known as the greatest of all time, at some point in my life...” S1mba is talking Music Week through the thinking behind the presence of a baby goat named Ramos in his new video for Loose, something the 21-year-old is very happy with. Real name Leonard Simbarashe Rwodzi, he’s been a sensation in 2020, up there with Young T & Bugsey as the UK rap scene’s biggest on TikTok.

Loose features KSI – who also has a fair working knowledge of the internet – and is currently doing the business as the follow-up to S1mba’s Top 3 single Rover, which inspired one of lockdown’s biggest TikTok challenges and won him a deal with Parlophone. It has 128,180,025 Spotify streams and 712,324 UK sales (OCC), while the video – which stars both rappers larking about on waterslides in the grounds of a huge mansion – set a new 24-hour record on GRM Daily, with 1.1m views on its first day.

People react to realness you've got to be genuine

“KSI is known as the greatest YouTuber and I want to be known as the GOAT, so we thought, ‘Why not?’” S1mba explains during a break between rehearsals for his first ever TV performance (it’s top secret for now, but airs next month). “The goat looked amazing and was so cute, too.”

Loose, a laid-back party song, is an effective illustration of why S1mba reckons his music is connecting so strongly. He can’t put his finger on exactly how to go viral (“If I had a formula, I’d have sold it!”) but he has a fair idea.

“People match an artist’s vibe,” he reasons. “So if the song’s funny, or it makes you want to move, or gives you a certain vibe, whatever it is, people just love it and want to dance when they hear it. Doing this is the most fun you can possibly have, so just make sure you’re enjoying what you’re doing and putting your all in, then I think it just works out on its own.”

While there’s slightly more to pop success than that, S1mba’s explanation makes sense when set next to his music, a melodic hybrid of the most radio-friendly areas of Afrobashment and UK rap. It’s all about escapism.
“People react to realness, you’ve got to be genuine,” he says. “Music tells a story. I couldn’t tell you, ‘The message I want from my entire career and catalogue is this...’, but at the moment I’m in a good spot in my life. I’m happy and everything’s going well, so I just want my music to reflect that. If I feel any other way maybe in a few months, then I’ll want my music to reflect that. Music is art, I just want to put it out there.”

S1mba’s been cultivating that point of view since his primary school days in Zimbabwe, where taking up the Djembe drum sparked an obsession with music that would lead to him learning marimba, then piano when his family moved to Oxfordshire and later to study sound engineering at university, a course he’s still pursuing, amidst all the hype.

“My music teacher said, ‘Yo, you’ve got rhythm’,” S1mba explains. “When you’re young, you pick up stuff so much easier than everyone else. When I got to the UK I started piano and realised, ‘This is sick, I love this’. It was the first time I was old enough to know it was more than a hobby, it was a passion, a love.”

All of which has led S1mba to what appears to be limitless possibility. He spent lockdown keeping his parents awake making music at home, and is back in London, perfecting his craft. “I go to every single session with no idea what I’m going to record,” he says, buzzing. “I love it so much, there’s excitement and something new every day, I just can’t stop...”