On the radar: Sea Girls 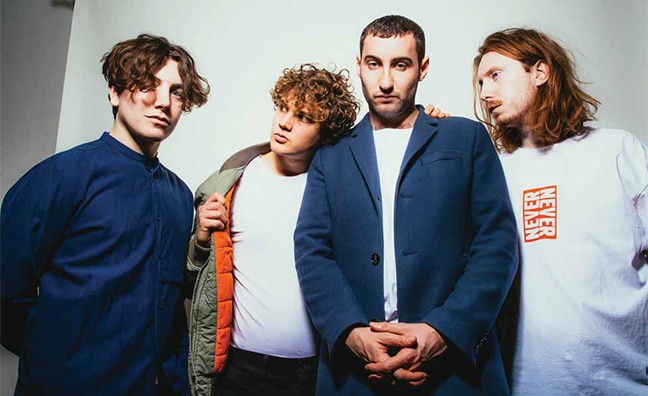 Henry Camamile is starting 2019 in pursuit of wildness. You might not necessarily expect reckless abandon from a young man whose surname calls to mind a calming cup of herbal tea, but that’s what Music Week gets from Sea Girls’ singer and guitarist. Completed by guitarist Rory Young, bassist Andrew Noswad and drummer Oli Khan, Sea Girls formed after going to school together in Leicestershire, when their passion for indie bands was at odds with the classical leanings of their music department, not to mention Camamile’s mum’s obsession with prog. Their name comes from the “city girls” line from Nick Cave & The Bad Seeds’ Water’s Edge: Young loves the song but has always sung it, “sea girls”.

“We grew up with bands, and that’s what we do,” is the frontman’s simple introduction. Part of the BBC’s 10-strong shortlist for the Sound Of 2019 poll, Sea Girls spent last year on the road, and it was a story of big choruses, spilt pints and sticky floors. “Last year was amazing, now we’ve got to keep going,” says Camamile, delighting in a rapid live trajectory that began at tiny North London pub The Islington in June 2017 and is arcing towards a date at the 1,600-capacity Heaven in March. “It’s always been exciting. We’ve been able to have a buzz in the room wherever we’ve played,” adds the singer.

Camamile puts Sea Girls’ live success down to the energy the quartet can summon from the rough and tumble of tracks like Call Me Out and All I Want To Hear You Say. “Most of our songs make you want to get up and move. So we do that,” he says. “We play like it’s our last show [every time].”

Sea Girls are very clear about what they want people to take away from their performances too, be they diehard fans or the uninitiated. “I want people to feel really good, like they’ve witnessed something exciting, where you can just let go,” says Camamile. That’s what I used to like doing [at gigs] before being in a band, I wanted to go wild. We want it to be really positive, wild and a bit scary as well, to get the blood up...”

The key to the nation’s heart rates lies in the songs Sea Girls are able to write, and Camamile says their craft is ever-improving, with the simple target of “writing the best songs, ones with immediate impact” at its centre. Still unsigned, they’re recording their debut album with former Hundred Reasons man Larry Hibbitt in Brixton. With the record due this year, sessions are progressing well, but Camamile is coy about the race for the band’s signature: “Loads of people seem to quite like us, and if the right thing comes along then that’s great.”

Part of the appeal is surely their pop instincts. “We love bands, but we also love pop, we want to be a band that appeals to pop fans as well, at points,” Camamile says. “The 1975 have done that, The Killers have done that big time, and that’s a space we want to fill.” In short, Sea Girls want to be your new favourite band. “We love sharing our songs with people who want them,” finishes Camamile. “And I love writing a big chorus."