On The Radar: Sinead O'Brien 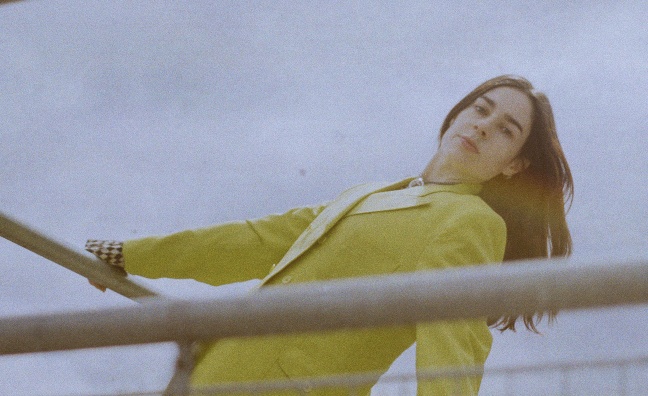 Somewhere in the eastern reaches of London, Sinead O’Brien is in a room full of words, notebooks and sheets of paper heaving with prose, poetry and ideas. Here, the Irish songwriter and poet is in her element. She’s just returned home from visiting family in Limerick, and is elated to be back among her manuscripts. “I’ve been writing lots of new everything,” she begins. “Diary entries, little documents, letters to myself, an interview with myself, a couple of chapters of something that I don’t know what it is... It’s been nice.” A new Dan Carey-produced EP, Drowning In Blessings, is coming soon and it arrives as something of a cattle prod for the music industry, teeming with restless, punk-rooted music and O’Brien’s vivid poetry. It’s only four songs long, but each one strikes like lightning.

O’Brien, who studied fashion in Dublin, spent time at Chanel in Paris and now works for Vivienne Westwood, is particularly energised by its opening track, Most Modern Painting. “I still can’t make head or tail of what it feels like to me, that’s a really positive thing,” she says. “It has me very excited. That song went to another level, another place, it’s feeding me more than anything else.”

Coaxed into being by O’Brien and her bandmates, guitarist Julian Hanson and drummer Oscar Robertson, the track is electric, powered by a relentless rhythm derived from O’Brien’s words. Its opening line, ‘This could be freedom...’ sums up the feeling the singer seeks from her craft. “This is something I absolutely have to do,” she says. “I’ve tried living without, going on holidays or taking a break, but no matter what I try, it’s the thing that heals or re-energises me. It’s an essential part of me now.”

I really seek thrills, I love the feeling of danger

Words have been important to O’Brien forever, and she pushed herself to explore her obsession further by saying yes to an offer to do a spoken word gig at The Windmill in Brixton a few years ago. She had no songs and nothing prepared. It turns out that jeopardy is what drives her. After releasing A List Of Normal Sins in 2018, she linked up with Carey for the brilliant Taking On Time single last year, and is now signed to Chess Club. The buzz caught the attention of John Cooper Clarke, who invited her on the road.

“I was thrown in and that felt very big, as if I was standing on a stool and there were no legs under it, but kind of amazing at the same time,” she remembers. “I really seek that kind of thrill, I love that feeling of danger. That was a very good feeling, it gave me a taste for it.”

Now, O’Brien is enraptured with the idea that she can write and perform her music to an audience. Quite simply, she lives for it. “I don’t think anything has ever fitted so well with me, it’s pure in that way,” she notes. “It’s the right thing to be doing and I’m doing it for the right reason, I know I am. I want to energise people, invigorate them and make them feel excited and full, absolutely full.”

O’Brien gets that feeling in the rehearsal room with her band and has clearly been missing what she calls “a precious space”.

“Our minds go to a place of recreation rather than work,” she says. “I have to keep it that way, otherwise there just wouldn’t be anything, it would fall apart.”

It’s obvious that O’Brien isn’t going to let that happen any time soon. Indeed, she wants to bend the future to her will. “I really do think about it,” she says, looking ahead. “Hopefully there’s longevity to what I’m doing. There’s a huge ground you can cover with words...”