On The Radar: Skinny Living 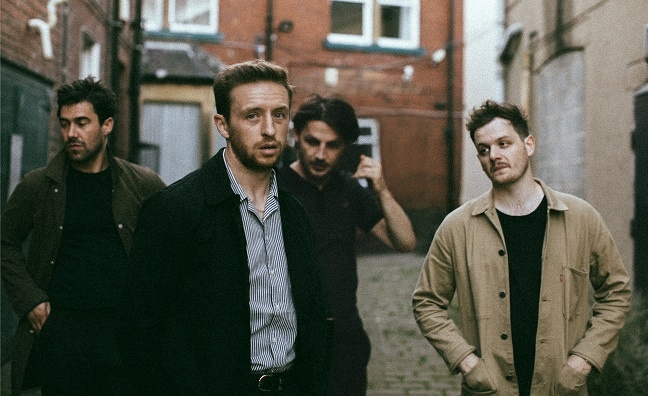 I just want our music to last. I want it to make a difference for people. I don’t want to be part of a movement just for the sake of being cool.” Skinny Living frontman Ryan Johnston isn’t here to waste anyone’s time. His has been an eventful life so far, and his experiences colour the four-piece’s anthemic, guitar-led songs. New single My Blood bristles with intent, exploring the Belfast-born singer’s background and the conflict between the Catholic and protestant sides of his family.

“The music is what we’ve lived through,” he says, taking time out on the afternoon school run in his Wakefield home town to speak to Music Week. “I don’t feel we can be any other way but that. It’s not concept music, we’re not trying to fit into a character, it’s just what we know. It all has to be as real as possible.” Even a few minutes with Johnston is enough to know that Skinny Living – completed by guitarists William Booth and Danny Hepworth and drummer Rhys Anderton – means everything to its members. “It’s given me bigger purpose. My son was born two years before the band formed, when I moved over from Ireland,” he explains. “My son gave me purpose first and foremost, and music was a way of doing something I actually loved rather than doing jobs you hate.”

Back in Belfast, Johnston admits, he “didn’t live the straightest life”. “I was ducking and diving and involved in things I really shouldn’t have been involved in,” he says. “Moving here gave me a fresh start, music has made me much happier.” But since Skinny Living formed at an open mic night in Wakefield and started working on orginal songs, it hasn’t all been plain sailing. In January, they signed to Polydor after leaving RCA. “We did some time with RCA, and the vision they had for us and the vision we had for ourselves didn’t match, so it was quite hard at times,” says Johsnton.

“It can send you down a rabbit hole, creating music that isn’t right, what you’re being told to create, rather than what you want to make, or what your fans want. It does make you dizzy, but it’s never put me off.” Skinny Living are a band revitalised, with a tour coming up in September and more new music on the way. Instead of worrying, Johnston is basking in the glow of My Blood, a song “you can dance around the kitchen doing dishes to” that carries a heavy lyrical message.

Looking ahead, he’s relishing the challenge of making sure as many people as possible hear Skinny Living. “I don’t feel we’ve always fitted in with the crowd, if we’re on stage and there’s a load of other guitar bands there, we do stick out, our sound is not so indie,” says the singer, who idolises Bill Withers. “The music is based on the song first and foremost and we play the instruments we have to get it out there. It’s not like we walk into a room with loads of guitars and a drum kit and start thrashing around until something comes out. The songs get written and we make them bigger.” Seeing them connect, Johnston concludes, “is the biggest release, an unbelievable feeling”. Long may the rush continue…