On The Radar: Sorry 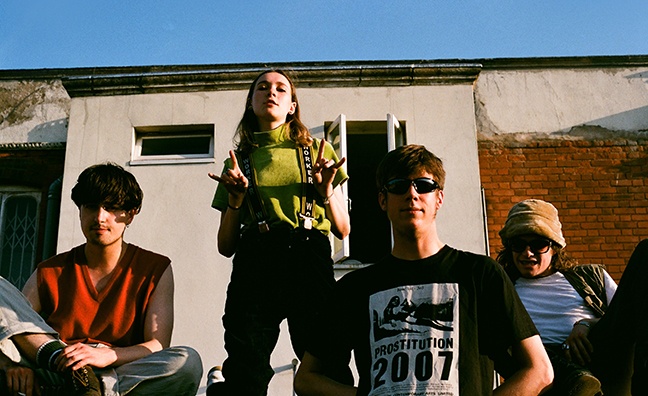 It’s quite crazy, it’s hard to believe… a bit. I didn’t expect it.”

Asha Lorenz is reflecting, somewhat hesitantly, on the biggest thing to happen to her band so far. Sorry, comprised of Lorenz and fellow guitarist, singer and songwriter Louis O’Bryen, plus bassist Campbell Baum and drummer Lincoln Barrett, have signed to Domino Records, home to Arctic Monkeys and Jon Hopkins. The unassuming North Londoners who covered John Newman as kids and were once known as Fish have rocketed into the limelight in recent weeks.

But rather than the buzz generated by their deal, support slots with Childhood and Pixx and their impending London headline show, Sorry are dwelling only on the music. The product of wide-eyed twilight hours surrounded by personal ephemera, it’s all they care about. “You’ve got to remember you’re making music for yourself,” says Lorenz. “It’s quite easy to get lost, just because you’ve signed something doesn’t mean you’re going to have quick success. I just try hard to keep doing what we set out to do.”

And what, precisely, is that?

“I just like making bedroom music, I like to keep things original and special. I feel like that’s how you keep making music people like and are interested in. If it’s not special to you it doesn’t really shine,” she answers. And the quartet’s latest work – 32-minute mixtape Home Demo/ns, which comes with freaky homemade visuals, and upcoming Domino debut Wished – shines brightly. Awkward, weird and playful, Sorry’s threadbare melodies and sense of humour pull their songs in too many directions to count.

“I don’t want to be a ‘guitar band’, we all like a lot of different music,” Lorenz says, pointing out that this is what her generation does when it comes to music. “Everything’s more accessible, you make a playlist rather than listen to an album. It’s kinda sad but we might as well go with it. We released a tape, but the songs are online too. It’s fun to think it [the tape] could get lost…”

In coaxing their songs out of their bedrooms, Sorry are stepping gingerly into the industry glare, getting to grips with producers, studios and all that comes with it. Most important though, is retaining the intimacy that defines them. “We just want people to get a bit emotional,” Lorenz finishes, with a sniff. “If they can relate, then that’s good."