On The Radar: Squid 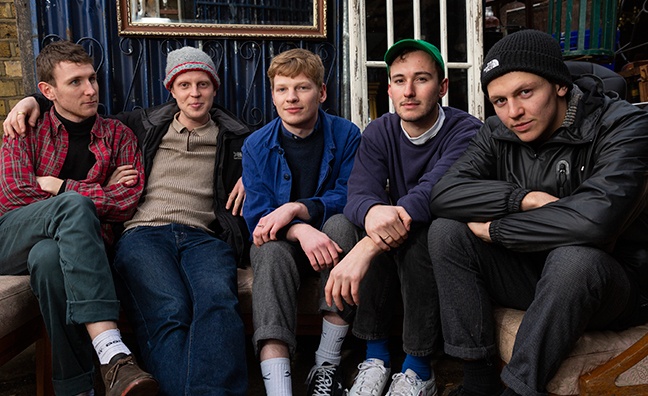 Ollie Judge is getting ready for life as a full time rock star. Squid’s drummer and vocalist is speaking to Music Week on his last day at work, and is leaving to concentrate on the band. He laughs and confesses his “tongue is firmly in cheek”, but his band are going for it. They play SXSW this week (their first time in America) and a new EP is on the way. They’re part of a bedraggled bunch of new UK acts playing pulsating versions of post-punk. As it turns out Squid – completed by singing guitarists Anton Pearson and Louis Borlase, bass and brass man Laurie Nakivell and keyboardist Arthur Leadbetter – have tongues wedged in their cheeks constantly. After forming at university in Sussex, they broke through in London, a city Judge says “makes you sarcastic”.

To find out what he means, give current single Houseplants a spin, Judge rants about being broke (“Rotting cesspit/Fear in your eyes”) over wiry backing. “Me and Louis moved to London a year-and-a-half ago,” he explains. “It’s had a very direct influence on the lyrics, they’re a lot more sarcastic and sardonic, a reflection of coming to a huge city where you don’t feel connected to a lot of things.” Judge and Borlase are relocating to Bristol, where they’re from, and Leadbetter will soon be the only Squid member based in London. But rest assured the deadpan lyrics will remain: “The sarcasm will never go, it just won’t be as intense. It’ll be more West Country.”

Before all that comes SXSW, and Judge is looking forward to shoving Squid’s intense live shows under the nose of the US industry. “I thought it’d be cool to play it so I applied, we didn’t think it would happen,” he says. “Now we’ve got visas, it’s a joke that went too far and now we’ve got to do it...” Funded by gig and T-shirt money and a PRS grant, Squid rock up in Texas as one of Britain’s brightest prospects. “It’ll be nice to play in front of some Americans,” says Judge. “Our music has got a slight Britishness to it, one that might be quite alluring, like XTC or something. I think they’ll enjoy it.”

Squid started life experimenting with jazz, soul and ambient (one early project was called Soul Campbell), and Judge reflects contentedly on the mutation of their sound, which has been helped in no small part by producer and Speedy Wunderground boss Dan Carey. “It was borne out of us jamming in each other’s bedrooms. We sat down when we played and did a lot of ambient and jazz music,” the singer explains. “Then we played one gig where the sound was so terrible that we all had to play as hard as we could and I started shouting into the microphone. It was fun making it more high energy, we started listening to more punk and krautrock and the live thing came into its own.”

Three of Squid’s number studied music, which creates an appealing contrast between precision and abandon. Still, they seem a thoroughly unpredictable bunch. “When we do an album we want to go big and get huge string sections,” Judge finishes, daydreaming. “Now we just need to hunker down and write some new songs."