On The Radar: Starcrawler 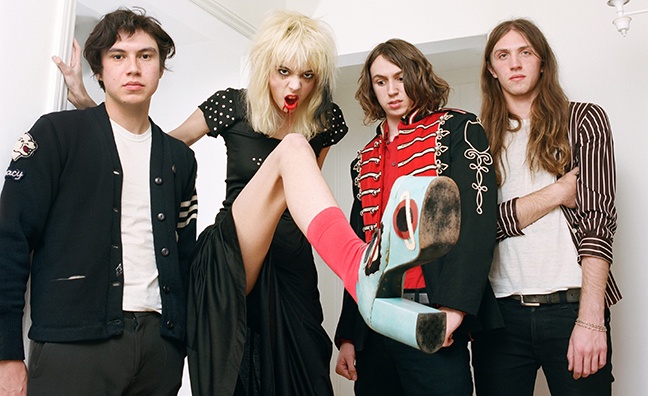 Dressed in a hospital gown, Arrow De Wilde clenches her fists, draws long arms above her head like she’s wielding an axe and opens her mouth. Fake blood soaks her chin. She holds her mic stand with a cat-strangling grip and lets out a scream only a true maniac is capable of.

Welcome to Starcrawler’s first ever UK show. It might be a Monday night in East London, but this is a thrilling, unholy experience. A few days later, we’re hiding from the rain in a box room upstairs at Brighton venue The Haunt with the teenage Los Angeles four-piece. They’re about to inflict their carnage – which is a bit like Yeah Yeah Yeahs hooking up with New York Dolls, with Jack White’s feral nephew on guitar – on The Great Escape. It’s their fourth show in four days. Guitarist Henri Cash, bassist Tim Franco and drummer Austin Smith drowsily admit they’re “sleep-deprived”, and De Wilde pokes agitatedly at a fan blowing cold air in her face.

“The shows have been really fun so far,” offers Cash. “It’s cool that we formed in a garage two years ago and now we’re playing here to a bunch of people. And we have a big record label and a vinyl out. It’s a good feeling.” They joke about the “prostitutes, caviar and limos” of the courtship from Rough Trade, but Starcrawler are unanimous in their appreciation of the label. But we don’t deviate for long, their live show must be dissected at once. “Arrow was in a hospital gown going crazy at our first one,” says Cash, fondly recalling the first time they tore up Sunset Boulevard. “That was our base level performance, so we built off that, it’s mainly about putting on a good show,” adds Smith, his hair falling in huge curtains over his shoulders.

Okay then, Starcrawler, what makes a good show then? “Balls. I like the balls element,” says Cash. “Yeahhhh!” agrees De Wilde. Cash elaborates further: “That first note, you feel it in your body and you know what’s gonna happen. You put your whole body into it, forget everything else that came before.”

In order to let loose as they do, Starcrawler have extremely high standards when it comes to tightness. These are achieved by hours and hours of rehearsal. In fact, they’d recorded their first demos before they ever played live. “We’re tight in your pocket, that way, the shows can be as crazy as possible,” reasons Cash. And what about De Wilde’s unhinged persona? “What I do and what we do is totally us, I’m not trying to be the next Iggy Pop or something,” she says. But should there be a new Iggy, where are the young rock’n’roll figureheads these days? “There’s never gonna be another Iggy…” Cash answers. So, do young rock icons not exist in 2017, then? “Woah, no,” he counters, pointing a finger at De Wilde’s bruised knee. “You got one right here, man.”

They’re just as confident in their songs, which will be collected on their Ryan Adams produced debut next year. “Songs need to be catchy,” drawls De Wilde. “If not then it’s not a song, who cares about it?” It’s a fair point, but she needn’t worry. It’s pretty much impossible not to care about Starcrawler.