On The Radar: The Orielles 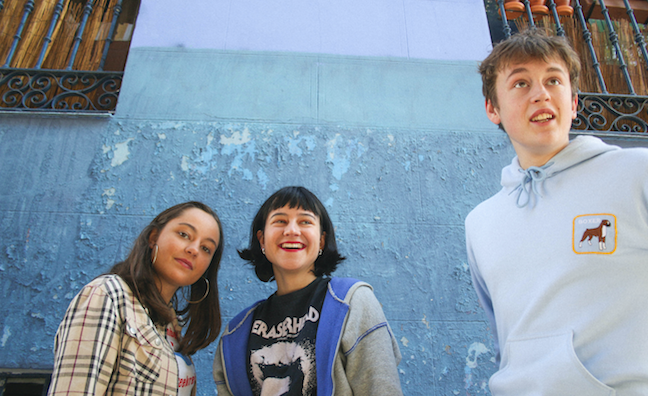 The Orielles are savouring their very own silver dollar moment. The trio made the expression up when an early hours gig at Toronto’s Silver Dollar Room went unexpectedly well – they’d been awake for 36 knackering hours and had already played once that night, and so weren’t expecting much. As with many of the jokes cooked up by sisters Sidonie B and Esmé Dee Hand Halford and their best friend Henry Carlyle Wade, it stuck. So hard in fact, that they named their debut album after it. An extremely danceable collision of crystalline indie pop melodies, higgledy-piggledy rhythms, surreal lyrics and a heavy dose of baggy blur, the record surprises at every turn.

The band are already touring it hard, and Music Week catches up with singing bassist Esmé and drummer Sid on a day off round their parents’ place in Halifax. Guitarist Henry is studying for his A-levels. “It was like only we existed in the studio,” Esmé begins. “The outside world was so secondary.” You don’t have to spend much time with the album, released via Heavenly in February,  for that to make total sense. Sessions with Marta Salgoni (Kelela, Björk, The Moonlandingz) were a riot of dancing, mind-losing and, erm, lab coats. “There were these lab coats around, so we’d end up wearing them while recording, we looked like Devo or something, it was a bit strange,” says Esmé.

“We wanted to experiment with as much as we could possibly experiment with,” says Sid, addressing the plethora of freaky noises that snake through songs with names like Borrachero Tree and Blue Suitcase (Disco Wrist). “The studio was full of vintage gear and instruments we’d never even heard of, so we wanted to have a go with everything. It was a child in a sweetshop situation, really!”

Delivered in broad Yorkshire accents, the sisters’ answers are a window into the sense of fun that defines The Orielles, who love cinema, formed at a 40th birthday party and have a song about Henry’s drunken pocket-emptying habits (Henry’s Pocket). But this band are also here to push DIY culture further into the mainstream, excitedly remembering local milestones including a recent signing at tiny Halifax pub The Grayston Unity as, “helping to give Halifax some buzz and helping businesses here.”

Like their Madchester forbears, Sid says, The Orielles started with the idea of “friends making music to dance to, not really caring much about the industry”. Now though, they’re intent on spreading their sound far and wide, with more gigging to come. “Our last tour sold out, that was really humbling,” says Sid, as the sisters prepare to leave their family to it. “We like to add improvised bits when we play live, too. Something for people to remember and think, ‘Oh yeah, that was good’."