On The Radar: The Rhythm Method 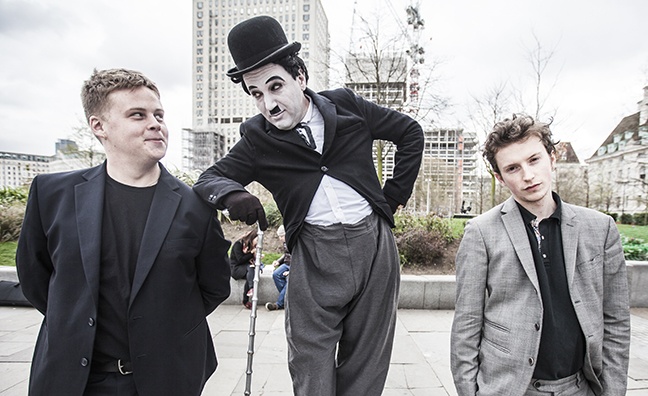 Joey Bradbury and Rowan Martin are in a band called The Rhythm Method, and they want to be massive. They formed somewhere under Heathrow’s flight path in South West London about four years ago, after Joey spent too much time indoors at his parents’ house, smoking weed and writing songs.

Their music straddles pub-rock, pop and indie, and their lyrics are about pubs, mates, taxi journeys and city life.

They like pints, football and ‘70s shows like Minder and Rising Damp. Mike Skinner produced Cruel, their latest single, and Elton John, Suggs and The 1975’s Matt Healy are all fans.

When they play live, Joey does deadpan vocals – he sometimes sounds a bit like a bingo caller – while Rowan plays keyboard and sings. They often do a little homage to Robbie Williams.

They’re playing their biggest hometown show yet at the Scala this week (May 3) and a new EP is in the works.

If all that sounds promising enough, this music lark isn’t exactly a walk in the park for The Rhythm Method.

“We seem to be getting a bit more attention this year, it feels like things are moving forward,” begins Joey, “But occasionally it feels like we’re going uphill.”

Rowan expands: “We’re swimming against the tide a little bit with the rest of the music scene, a lot of people don’t understand us, or dismiss us as a joke, so we’ve got that to overcome. I think there’s a weird attitude towards us, basically.”

Joey says the pair are “peerless, in a way”, in that they’re not part of any scene and are slightly older than most of the bands they share bills with in London.

“It feels like other bands have got more friends so there’s a bigger audience,” he says. “We’re at the age where we’ve fucked off most of our mates.”

Dreams and ambition drive them forward. “We want to be a big band and make an impact,” says Rowan. “If you look back, the best British music has always been the weirdest or most dangerous.

We want to create the songs everyone walks down the street singing, with the danger that Dexy’s or Prefab Sprout had.”

Joey adds that the industry is “safe” and, “a lot of music that comes out now just takes its place on a playlist alongside everything else, not really making an impact, whereas we want to be shifting culture, really.”

They plan to do it by writing songs that “say things about people’s lives and giving an alternative to fake sincerity”, says Rowan.

“Yeah,” Joey chimes in, “Honesty and realness are missing from music, even if it’s just reassuring you that you’re not the only person that feels the way you do.”

This everyman-as-a-pop-star idea leads us to a natural end point: Robbie Williams. Rowan says the pair model themselves on Williams and Guy Chambers, with him as the “musical guy” and Joey “giving the Joe Public factor, basically leading the pub singalong”.

“Robbie is the template of what I want to do,” Joey says. “Minimal talent and maximum success, a megastar who’s like his fans, a classic British entertainer. He’s basically a redcoat, that’s exactly what I want to do.”