On The Radar: The Snuts 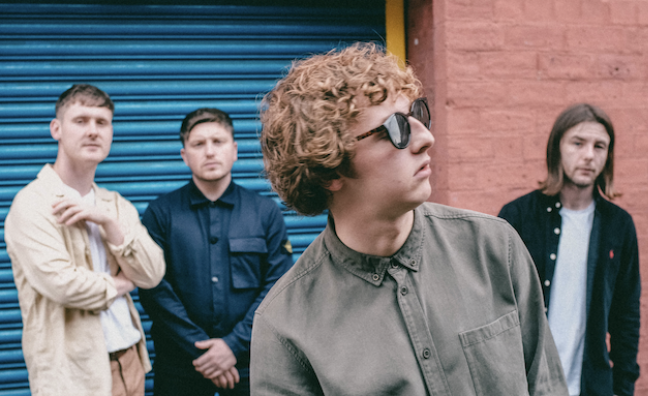 Jack Cochrane is like a coiled spring. The Snuts frontman is speaking to Music Week from his home in Glasgow, before meeting his bandmates – guitarist Joe McGillveray, bassist Callum Wilson and drummer Jordan McKay – in the studio. But while that all sounds perfectly normal life at the moment is far from what these West Lothian boys are used to.

Growing up in Whitburn (where they were a couple of years ahead of their friend Lewis Capaldi), The Snuts made it their mission to make rock‘n’roll history as teenagers, and had built up a real head of steam of late, with tracks like Glasgow, Seasons and Juan Belmonte illustrating their spiky, progressive take on indie music. But then came the pandemic, wiping out recording plans and a huge touring schedule. As Cochrane says, it’s harder to change the world when you can’t go outside. Harder, but not impossible.

“Glastonbury was the one for us, we were desperate to play it,” he says. “So that hit us quite hard. At the stage our band is at, it’s about trying to make sure there’s no dip in momentum. Getting to new people and letting them know what we’re all about has been challenging, especially when we were riding a high. Trying not to be disheartened has been the hardest thing.”

You wouldn’t know it from The Snuts’ recent output. After their Mixtape EP dropped in March, hitting No.14, they have released the glossy Elephants (which came with a remotely made video featuring their first dance routine), tasted socially distanced gigging with The Libertines at Newcastle’s Virgin Money Unity Arena, played various livestreams and made a new single (Always, due next month) with producer Tony Hoffer.

“Now it feels like everything is moving and we’re forgetting about this big chunk of time that everybody’s missed out on,” says Cochrane. “I don’t feel like it’s really harmed our ambitions. We’ve used this time to pick up the pieces, it’s been productive.” The Snuts’ live activity during the pandemic has extended to Cochrane sending an open letter to Nicola Sturgeon calling for more government support for the live industry. When we bring it up, the frontman uses the word “sector” in his answer, a rarity for an indie kid that scores full points from Music Week.

“I don’t think it’s even something that’s been properly spoken about until now,” he says. “Everything else seems a bit more important, job-wise, than this sector. Just trying to have those conversations at the moment seems difficult, trying to get anybody to listen. It’s integral, and the people who drive the buses, do lighting and stuff like that have been ignored, simple as that.”

The Snuts are proud to be doing their bit to give their live team as much work as possible and made sure their recent Stay At Home livestream from The Tall Ship in Glasgow was as lavishly produced as possible. Judging by the photos their fans shared, many complete with bottles of Buckfast, it went down well. It’s all part of their drive to work harder than anyone else and push the boundaries of what being in an indie band means.

Cochrane says The Snuts are seeking to “break the stigma” around the genre. “People feel bands have to do something that’s been done before and regurgitate old sounds, styles, songs and attitudes to even just stay afloat,” he says. “But for us it’s all about challenging ourselves and our listeners with new sounds and pushing the genre forwards.”

With the full support of Parlophone and taking influence from their pal Lewis’s emphasis on work ethic and personality, The Snuts are very clear about their mission.

“It’s important that we try and pierce through the kind of indie music that’s been around forever, as much as we love it,” says Cochrane. “We’re always trying to do something that we feel hasn’t been done. For a lot of the bands around that middle ground, it feels like they’re terrified to take any risks or be called anything other than an indie band. We’re not, and it isn’t just about bouncing crowds up and down at 1,000 capacity venues, there’s so much more work to do.”

And even though the thought of releasing music while conventional touring is off the table is “eating away at the back of our brains constantly”, The Snuts will push on.

“We want people to see that we have ideas and freshness,” Cochrane says. “It’s about raising the bar.”