On The Radar: The Wandering Hearts 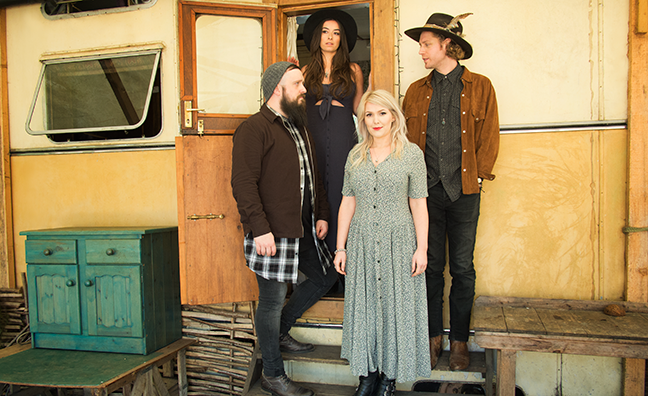 In the not too distant past, London folk-Americana quartet The Wandering Hearts played the biggest gig of their lives.

It also happened to be their smallest. The venue? Decca Records president Rebecca Allen’s office – a private showcase upon which much hinged, the kind of “mom’s spaghetti” moment Eminem once sang of.

“The pressure was immense,” guitarist/singer AJ Dean tells Music Week, detailing the moment sat beside his bandmate, singer/mandolin player Chess Whiffin in the Tate Modern café. Suffice to say, they didn’t blow it. “She left and said, ‘Hug me, I loved it!’” Whiffin grins.

That both look incredulous as they recall how they came to be signed to Decca is understandable. This all happened just six months or so on from their first gin-infused rehearsal in Crouch End after mutual friends put Dean and Whiffin in touch with the duo of singer Tara Wilcox and vocalist/multi-instrumentalist Tim Prottey-Jones.

The melodies soon flowed as freely as the booze.

“It was this crazy, crazy feeling,” Whiffin smiles “I remember leaving and calling my dad and saying, ‘Whatever’s just happened, we need to do it again!’”

What happened next sounds borderline mythical: the band got snapped up by a manager within 30 minutes of posting their first material on SoundCloud.

“Some say mythical, we say fact,” she clarifies. “It’s incredible, it does sound like a story we would make up but it genuinely happened, it genuinely is the truth.”

Then again it makes sense they would be plucked instantly. Theirs is a beautiful sound, traversing country, blues, rock’n’roll, pop, folk and Americana and it’s winning them fans wherever they play, be it Country 2 Country Festival or the Barclaycard Stage at BST Hyde Park.

While their Burning Bridges EP gave a glimpse of their potential, it is nothing compared to their brilliant debut, Wild Silence, due for release in February 2018.

For perspective, they recorded 60 songs before torturously whittling it down to just 12 standouts, including the moving single Wish I Could.

“It’s about a break-up that’s got to the point where nothing can be done to fix it,” reflects Dean. “We all share our past experiences when it comes to writing, a few of us had come from a place where we’d been in that situation.”

What’s more, their material is connecting with more than just each other. Just ask country legend Marty Stuart, who personally invited The Wandering Hearts to play with him in America next year.

He did so after making them play, what Dean describes as, a “terrifying” soundcheck/gig in front of him when they toured together in the UK in October.

Dean bursts out laughing, shaking his head in disbelief, as he contemplates the US shows next year. With their own headline tour set for February/March next year, you get the feeling it won’t be the last time he’s in this position...