On The Radar: Warmduscher 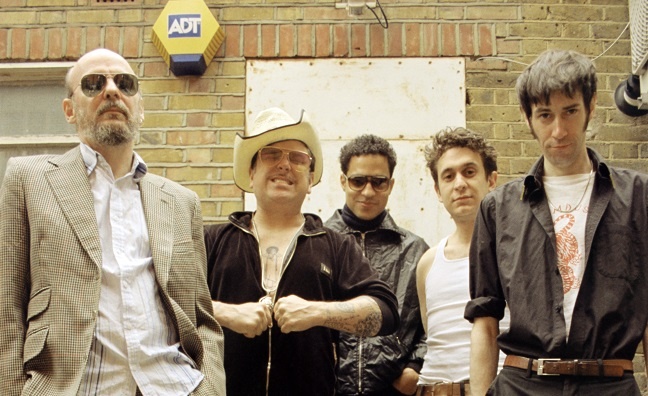 Imagine starting a band and then wishing it would all fall apart almost immediately. That’s what happened when Warmduscher formed in London in 2014, as its revolving cast took enough time out from other projects to concoct the frenzied, improvised rock‘n’roll that made up debut LP Khaki Tears. But while they went about forging a reputation for crazed gigs and bizarre nicknames, leader Clams Baker was fretting about the sustainability of it all. “There were times when we were probably wishing it wouldn’t work because it was so mental, we were hustling,” he tells Music Week, speaking from the band’s lair inside a former Tate & Lyle sugar factory in South London. “We don’t have a manager or tour manager, we do everything ourselves and in the beginning that was quite stressful.”

Chief among their problems was chaos. Affiliations with Fat White Family, whose guitarist Saul Adamczewski is a former member and has spoken publicy about his experiences with substances, meant that some assumed Warmduscher were a deranged bunch of drug-dabbling ne’er do wells. Well, the hard-rocking five-piece – completed by guitarist Adam J Harmer, bassist Ben Romans-Hopcraft, electronics man Quinn Whalley and drummer Jack Everett, to use their real names – have proved otherwise. Their cosmic third album, Tainted Lunch, is on the way in November, and boasts features from Iggy Pop and Kool Keith. It’s a funk cacophony; groove and melody caked in noise. Its 12 songs, which bear names such as Midnight Dipper and Disco Peanuts, were recorded to tape in four days with Dan Carey (Black Midi, Franz Ferdinand, Kate Tempest) and are held together with electric energy. If you’re wondering about the title, it’s based on the story of a German man who spent 20 years gradually poisoning his co-workers.

“We know we’re a really good band. We give 150% at every show and we don’t want to pretend to be upset about what we’re doing,” says Clams, who favours a nice Stetson hat. “We’re super happy to give everything we can to the people who pay to see us and we want to make people feel included not excluded. There’s nothing worse than going to a show and seeing a band be miserable.”

Further light relief comes from the group’s ‘biographer’, a mystical character called Dr Alan Goldfarb, who describes Tainted Lunch as, “A sample hole through which to taste another universe”.

What’s all that about, then? And who is Goldfarb?

“I can’t say can I?” Clams answers, rhetorically. “I can tell you it’s not me, though, I’m not that quick.”

The singer says Goldfarb’s words constitute a fair description, adding that what defines Warmduscher most is their energy. “There’s a sense of, ‘Shit, what are we gonna do?’ but it always comes together,” he says. “It’s like a whirlwind, that nervous energy and excitement is on the record.”

It certainly is, to the extent that Iggy Pop and Kool Keith’s contributions are absorbed into the mania. “Iggy played our last album a lot on his radio show and I’d reached out to Kool Keith previously, and they both did it,” says Clams. “It’s two of my idols on one record and us bunch of idiots. It’s really gratifying. Reaffirming what we’re doing is good, that probably sounds pathetic, but sometimes you need that.”

Before we leave him, Clams slides open the window into life in this odd, gnarly band a little further. “I don’t want to spoil the surprise, but it’s rarely ever debaucherous, it’s not like that Mötley Crüe film on Netflix,” he says. “There’s this misconception that we’re some kind of handful, but we’re really not. When we get together to play we just have a lot of fun…”

Long may it continue.