On The Radar: Wildwood Kin 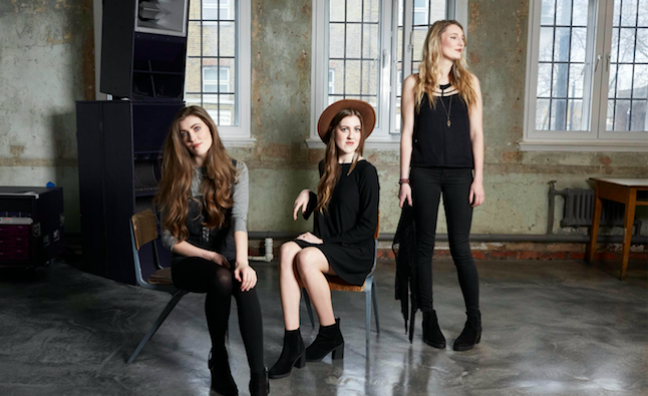 Before Meghann Loney, Emillie Key and Beth Key became known as Wildwood Kin - the hottest new UK folk act in years - they were something else. “We’re family,” beams drummer/vocalist Loney to Music Week. “Beth [bouzouki/keyboards/vocals] and Emillie [guitar/vocals] are sisters and I’m one of their cousins. We grew up together in a very musical family and singing was a very normal part of life.”

This familial closeness is at the heart of the most extraordinary aspect of the group’s music: their incredible three-way vocal harmonies. In their pre-band years, the Exeter trio would harmonise everything that came into earshot, be it songs on the radio, the doorbell, TV jingles or adverts. Filtered through influences such as Simon & Garfunkel, Fleetwood Mac and James Taylor with newer acts like Mumford & Sons, Fleet Foxes and Ben Howard, their vocal interplay has many touting them as folk’s answer to Haim.

“Country, Americana, pop, rock, folk, indie, alternative...” lists Loney. “We get called all of these different genres but the one that crops up the most is folk. Now, more than ever, folk - or current folk anyway - does have a really valid place in the music world. There’s a lot of times when you look at the charts and things sound exactly the same. The awesome thing about folk is that it always tells a different story and you get a much more personal perspective.”

When it came to delivering their own stories, they cut their teeth in the music capital of the world: er, South Devon. Their first gig was to 20-odd people at Stokeinteignhead’s Church House Inn. It was in this venue that they would end up performing to their future management. Things snowballed quickly. In 2017 they find themselves about to release their debut Turning Tides via the newly re-launched Sony imprint Silvertone, having recently played Glastonbury.

Over 18 months in the making, some of the gorgeous songs that comprise their debut actually started life as an EP. That is until those in their camp heard the quality of the material and encouraged them to turn it into an album. “We kind of freaked out,” laughs Loney. “We were like, We’re going to have to write a bunch of other songs in quite a short space of time!”

They needn’t have worried. The songs that have emerged - the delicate strains of The Author in particular - contain some of the most incredible harmonies you will hear in 2017, all shot through with deeply personal songwriting. “A big part of it is our faith,” says Loney. “We’re all quite spiritual. We describe ourselves as Christians but not in a religious sense in that we’re not a worship band or anything, but our faith does just naturally come into our songwriting. A lot of it is about our journeys with faith, or struggles, victories or different stages in our life that have been influenced by that.

“We always want to make people feel hopeful about life,” continues Loney. “I think there are so many songs about heartbreak or going out and the whole YOLO thing but it’s quite nice for people to listen to something a bit deeper. I hope that even people without any faith can relate what we talk about in our songs to their life experiences in some way.”