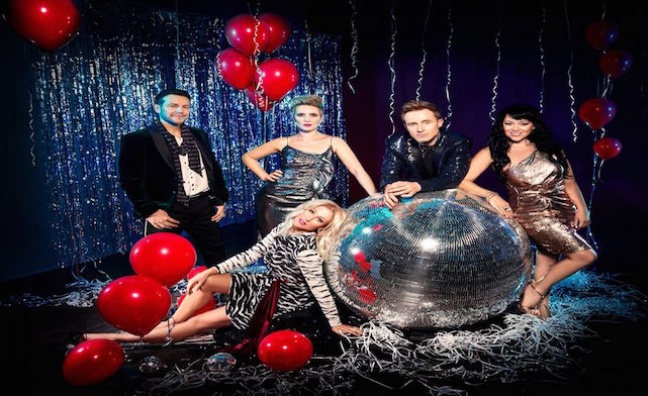 Today (April 21) Steps - that’s Claire Richards, Lee Latchford-Evans, Lisa Scott-Lee, Faye Tozer and Ian ‘H’ Watkins - release their new album, Tears On The Dancefloor, via their own label, Steps Music. It is many things at once: a comeback, their first studio album of all-new material since 2000's Buzz, the beginning of their 20 Years Of Steps anniversary, and the first part of a campaign that will lead towards a huge arena tour later in the year. Earlier this month, Music Week spoke to Steps and their team to see how they carefully plotted their return. As the big day of release finally arrives, Steps’ manager Peter Loraine of Fascination Management takes us further into the campaign that is set to bring one of the biggest British pop institutions back to the charts…

Has the reaction to the new material and tour exceeded your initial expectations?
“It’s everything I hoped for. When you take on a project like this you have to have a 100 per cent belief you can deliver it. From my point of view, I did All Saints last year and Steps this year, and I had total belief in both groups that they would be successful for a new phase in their career. With Steps we have so much to come from a promotion point of view. It’s been amazing that it all blew up so very quickly.”

How did you end up working on the project together?
“I was aware that this was going to be their 20th anniversary year, so I reached out to a couple of members of the group 18 months ago to ask if they had anything planned. They were unmanaged at the time so we met up and we discussed what I thought could happen for them, along with Gary Howard at United Talent, who is their agent – and was last time around. He is a huge supporter, and so confident in his belief of them. He’s phenomenal for them. I sat with my team – the three of us at Fascination Management that work on Steps - a year ago and plotted out a strategy that involved recording new music, we chose a team of people who would work on it promotionally and worked out the targets to set it up as an exciting launch. We’ve been able to tick off that list and it’s all come together really like a dream plan. It was a strategy planned a year ago and watching it unfold and be embraced by so many people is just wonderful.”

From a management perspective it must have been a hard project to plan – on the one hand, this campaign is celebrating the nostalgia of 20 years, yet it's also seeking to establish them as a current, relevant pop act?
“That’s been one of the fun parts of the campaign, because we had two strands to it. There are the hits and all the nostalgia and things people loved them for before, but what is so brilliant about Steps is that they’re an out and out pop band. They don’t pretend to be anything else, and they don’t want some cool person featuring on their record for the sake of it. I sat in some meeting with someone telling me, You need to make this sound contemporary – we’re not going to get it on the radio. But I knew there is still an audience for this kind of music, I think if you look back over the years [pop] dips, but it always comes back. There’s a massive audience for this kind of record that existed before – and if you look on the Popjustice blogs there are young people that have never really had a record in their lives like this before.”

The lead single, Scared Of The Dark, revisits the classic Steps sound, which isn’t like anything in the contemporary charts. Was it ever a concern that they might not fit into the modern pop landscape?
“Honestly, it didn’t cross my mind for a second that musically it wouldn’t be embraced. I knew the kind of record that we had to make with them. We knew we could turn this album into a record that would be loved by a lot of people. There are 10 new tracks on the album and they’re all like [Scared Of The Dark], there are no wimpy ballads. I’m really proud of the record because it’s been well thought out, the band have had a big input as well – they’re really happy with it. It’s been great to work on.”

The album boasts an array of incredible songwriters, including Ina Wroldsen, Steve Mac and Fiona Bevan – what attracted them to the project?
“So many songwriters have that kind of amazing pop song in them but they haven’t had the chance to write them for anybody for years and years because no one records songs like this anymore. Given a brief of what we’ve got here, everyone was up and running and loving it. There were no barriers, we just wanted up-tempo, classic, dance pop music with sing-along choruses and a key change on every record!”

Most of the tour is sold out, and there have already been five dates added. What can you tell us about Steps’ touring plans?
“We’re marketing it as the Party On The Dancefloor – it’s the best night in town. It’s one big party, all the hits and some of the new ones and surprise covers. There will be loads of dancing, it’s very visual and it's been immensely fun to work on creatively. You can really let yourself go on something like this, there’s no end of ideas.”

Finally, as this is all part of the 20 Years Of Steps anniversay, why do you think have Steps lasted in an ever-shifting pop landscape?
“I think that there’s absolutely nothing to be ashamed about by saying we are out and out pop music. If you stand by that, there’s a large audience of people that really admire that and know what they’re going to get.”

You can watch the video for Steps' comeback single Scared The Dark below: