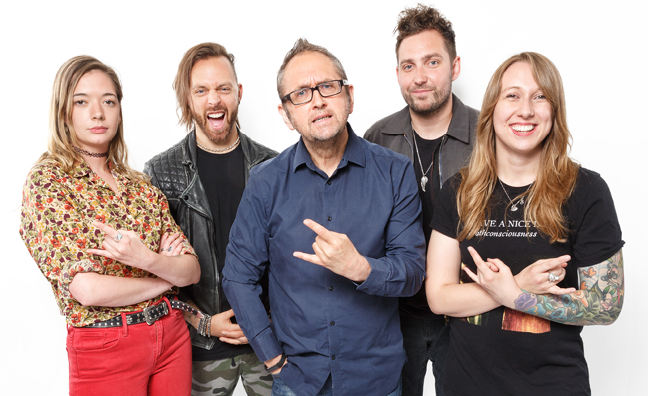 To celebrate its return, this week’s edition of Music Week takes a special look at the world of rock and metal music in 2018, with our cover story uniting Live Nation's president of UK touring and Download Festival promoter, Andy Copping, with the bands of this year’s line-up for an in-depth roundtable discussion.

In that feature we’ve already shed light on You Me At Six, Bullet For My Valentine, Marmozets and Employed To Serve, but that’s just for starters. Here Music Week rounds up six other acts that should be on your radar this weekend…

In this week’s cover story, Download booker Andy Copping told Music Week he was “overjoyed” that he’s lured Guns N’ Roses to headline this year. Their back catalogue has played a sizeable role in rock’s history (and mythology) and cannot be overstated, but what’s just as impressive is the manner in which they have returned as a live act. Their Not In This Lifetime… tour – reuniting Axl Rose with Slash and Duff McKagan – became the fourth highest grossing in history and continues to thrill. Expect all the classics, but also some surprises, too: their first show back this year saw them cover Slash and Duff’s Velvet Revolver track Slither.

The Prince Of Darkness is, of course, a Download veteran, most recently headlining to say farewell to/with Black Sabbath in 2016. While you can always expect Ozzy Osbourne to throw in some Sabbathy goodness in his solo sets (Paranoid, War Pigs), the fact is Ozzy has a stunning catalogue all of his own to mine from the headrush of Crazy Train to the classic rock strains of Mama, I’m Coming Home.

Headlining the Zippo Stage on the final day are Chicago political punks Rise Against  who are rarely anything but incendiary when it comes to playing live. Armed with newer material from 2017’s Wolves, and a host of songs that continue to resonate with recent headlines (People Live Here addressed gun culture via the Sandyhook school massacre), their set is primed to be the most emotionally powerful of the weekend.

One of the more remarkable stories to emerge in metal of late, Japan’s Baby Metal merge J-Pop melodies with power metal bombast to delirious effect in the form of songs like Karate and Gimmie Chocolate!! Having already headlined Wembley Arena in the UK, their fanbase on our shores remains ever-swelling in size and, coming hot on the heels of new track Distortion, this Download performance could well mark the start of the next chapter of their career.

Let’s hope the Avalanche Stage has a suitably reinforced roof. If not, the pulverising strains of Jamie Lenman may well constitute a profound healthy and safety problem. This unsung hero of the UK’s alt-rock scene has recently been wieldy his acoustic as much as his electric guitar, but with songs like One Of My Eyes Is A Clock Lenman attains a level of noise to rival even the likes of Meshuggah and Napalm Death (who you should also check out this year, naturally). Bonus: Lenman's brand new song Long Gone features Music Week cover star Justine Jones of Employed To Serve. Fingers crossed for a duet.

Aussie metal stars Parkway Drive have made quite the name for themselves in the UK, not just for a host of excellent records, but also for putting on one of the most enjoyable shows you could realistically expect to see. In past years, everything from inflatable waves to impromptu games of rugby have been part of their set, but if their recent dates in Europe are anything to go by, you can expect pyro. Lots and lots of pyro.