7 amazing moments from the BRIT Awards 2018 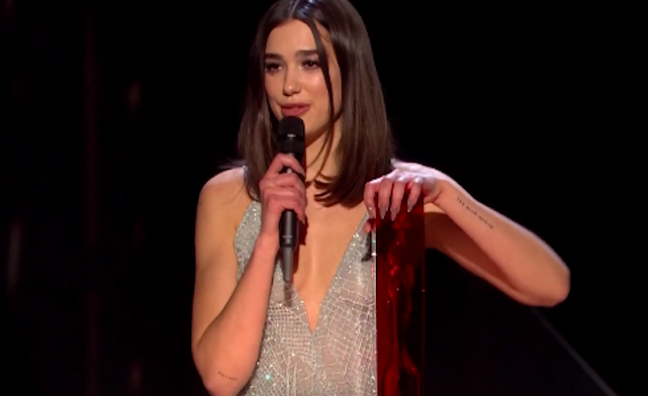 After all the speculation, all of the hype – which you can read about in the latest edition of Music Week – the BRIT Awards 2018 did not disappoint. The event, which took place at London’s O2 Arena and was hosted superbly by Jack Whitehall, proved to be a triumphant night for new British music, with Dua Lipa and Stormzy the big winners – click here to read the full list. Elsewhere, talking points were not exactly in short supply, from the big shock of Ed Sheeran only picking up one award, to a surprise appearance from Rolling Stones legend Ronnie Wood, and Rita Ora’s Duplo playset stage production. But in this list, we’re looking at the best of the best. Here Music Week’s team run down the seven moments that defined the night…

At the BRITs last year, Stormzy burst onstage with Ed Sheeran as an artist with designs on making the music industry quake. Twelve months on, his impact was rubber stamped as he scooped awards for Best British Male and Best British Album. The South London rapper has racked up almost too many milestones to count in the intervening period, but these two really mattered. He was overwhelmed during both acceptance speeches, and his expression served as a reminder of just how far his impact has spread. There were heartfelt thanks to God and his family, a reference to Atlantic’s Alec Boateng, and a passionate shout-out to Gang Signs & Prayer producer Fraser T Smith. “I gave everything, every emotion, we made something undeniable,” he said. But this was all just the warm-up: what followed was a brilliant, fake rain-drenched closing performance that underlined Stormzy's dominance of the BRITs 2018. There was Blinded By Your Grace, plus a hefty diss for Theresa May and a poignant reminder of the Grenfell Tower tragedy. By the time Big For Your Boots arrived Stormzy was leaping across the stage to greet his public. The din was huge. As if anyone needed reminding, Stormzy is a huge noise in music right now.

Ahead of the ceremony, the BPI wrote to record labels to advise them of the plans to provide all artists, presenters and guests at the ceremony with a white rose pin as a symbol of solidarity. As with the GRAMMYs earlier in the year, this solidarity was expressed by more than just fashion. As well as putting on one of the best performances of the night – not to mention winning two awards – Dua Lipa added to the #TimesUp message by accepting her gong with the words: “Here’s to more women on these stages, more women winning awards and more women taking over the world.”

While it was with great sadness that Ariana Grande – who was reportedly scheduled to make a surprise appearance – was unable to perform at the BRITs in tribute to the lives lost at the Manchester Arena attack, the city’s native star Liam Gallagher was on hand to deliver exactly that. Introduced by Take That’s Gary Barlow, who remembered the “14,000 innocent, music-loving people” whose lives inalterably changed after that fateful concert, Gallagher followed with a supremely moving rendition of Oasis’ Live Forever. It may have been truncated, but the feeling lasted long into the night.

Blur’s leader ambling onstage at the BRITs was unexpected; which isn’t to say that Gorillaz winning Best British Group was a surprise, more that the presence of a wave of new talent including Dua Lipa and Stormzy meant that we didn't necessarily expect to see him, we were distracted. But when he did get the mic, Damon Albarn stole the show. “I want to say something about this country,” he said. “It’s a lovely place in a beautiful world. Considering our size, we do incredible things with music. We’ve got an incredible spirit and incredible soul. Don’t let politics interfere with that.” The music industry has been chewing this issue over for a while now, but here a musical icon kept it simple and reinforced a feeling of faith in the room.

The winner of Best International Male put on a brilliant, subversive performance of New Freezer and Feel – which at one point displayed the words, “This is another satire by Kendrick Lamar” on a screen. Yes, it included a very strange intro in which Kendrick lay down in silence on top of a huge Perspex box with a posh car inside beneath him for a very, very long time. Many at home – and in the audience – presumably thought technical gremlins had taken hold of the BRITs. We’re still not sure if it was performance theatre or a glitch. Either way, when he finally got going, it was unforgettable. Even the sight of the aforementioned vehicle being smashed up with a baseball bat was dwarfed by Lamar’s venomous delivery.

Whether it be in terms of awards given or general representation, rock music was not a large presence at this year’s BRITs. Save for one towering exception: the Foo Fighters. Not only did they win Best International Group – Dave Grohl dedicating it to “all the musicians who plug in and play. Long live rock’n’roll!” – they also gave us a huge-sounding live version of The Sky Is A Neighborhood. It’s not every day you see a song performed on top of a chalet, you know. Especially not inside the O2 Arena.

7. And the award for best presenter goes to…

The sight of Big Shaq in the opening sequence was a no-brainier, really, but it proved a good omen for Jack Whitehall, a man whose piercing blue eyes and well-spoken put-downs won over a boisterous crowd. “Commiserations to all the losers,” he said early on. “If you don’t win a BRIT, you can buy one on eBay. There ain’t no auction like S Club auction.” Cue lols as everyone considered the recent plight of Paul Cattermole. Then, after Rag’N’Bone Man and Jorja Smith performed Skin in front of a burning stage rig, he said, “That was a controlled blaze, apparently Olly Murs has been tweeting from the toilet scaring everybody.” But the comedian’s best moment came when he plonked himself down with Liam Payne and girlfriend Cheryl. “I’m joined by Cheryl and her plus one,” he joked as he settled into his seat. “How’s date night?” Then, referencing Payne’s contribution to the soundtrack of 50 Shades Freed, he asked, “Is there a safe word?” “Don't stop?” Cheryl volunteered. Whitehall was thankful for the ad break that followed…