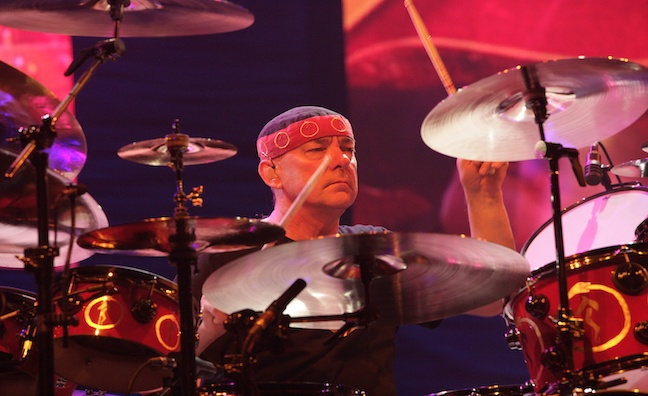 Tributes continue to pour in for late Rush drummer Neil Peart. In a statement issued on January 10, the Canadian prog-rock group confirmed that Peart had lost his battle to brain cancer (Glioblastoma) on January 7. He was 67.

The statement asked that “friends, fans and media alike understandably repect the family’s need for privacy and peace at this extremely painful and difficult time”.

Peart, a member of Rush for over 45 years, was widely-regarded as one of the greatest drummers of all time. Since his passing a host of top names, including Foo Fighters’ Dave Grohl and Metallica’s Lars Ulrich, have spoken about his enduring influence.

Rush’s final studio album, Clockwork Angels, was released on 11.06.12 via Roadrunner. It has sold 38,414 copies in the UK to date according to Official Charts Company data. The group concluded their final tour in August 2015.

Speaking about Peart’s legacy, Kevin Gore, president of global catalogue, recorded music for Warner Music Group, said: “Neil Peart was a musician and songwriter of immeasurable talent who will surely be remembered as one of the greatest and most influential drummers in the history of rock and roll. His ingenious lyrics painted incredible pictures that made Rush’s songs jump off their musical canvases. Across the band’s classic studio and live albums with Atlantic and Roadrunner, Neil has been a part of the Warner Music Group family for over three decades. We are all deeply saddened to hear of his passing today but we are proud to have been a part of the vast footprint he has left on the world. Warner will continue to honor Neil’s legacy as his music is celebrated for generations to come. Rest In Peace, Neil.”

You can read other tributes to Neil Peart below:

Thank you Neil. Thank you for inspiring me and for all your help and advice along the way, especially in the early days when you took the time to talk to a young green Danish drummer about recording, gear and the possibilities that lay ahead... Thank you for what you did for drummers all over the world with your passion, your approach, your principles and your unwavering commitment to the instrument! Rest In Peace.

So sorry to hear the news of Neil Peart passing. We’ve lost another one of the greats. RIP. pic.twitter.com/hOr0x4hnDm