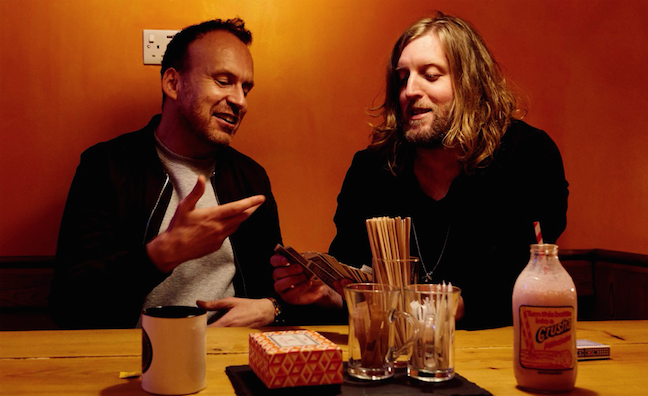 Andy Burrows has signed a new record deal with Fiction and announced details of a new collaborative release, Music Week can exclusively reveal.

The former Razorlight drummer and songwriter has committed to a four-album, worldwide deal with Fiction Records.

His first release will be Reasons To Stay Alive, a new collaborative work with best-selling author Matt Haig (pictured above, left), who will contribute lyrics to what will be Burrows’ sixth solo album.

Due in October, the record was made in a barn in Wittersham with producer Tim Baxter. Muse’s Dom Howard and Editors frontman Tom Smith appear as guests.

Fiction MD, Jim Chancellor said: "From the moment I set eyes on Andy it was man-love at first sight. He is such a wonderful talented human being, so it was a touch to get to work with him.

“He has fashioned a remarkable record with Tim Baxter and the idea to collaborate with Matt Haig I think is groundbreaking. Not mention that I grew up in Wittersham (I used to open the bowling for the village cricket team!) how could I resist? Here’s to a beauteous, successful union!"

Andy is such a wonderful talented human being

As a member of Razorlight, Burrows co-wrote No.1 single America, which has sold 660,216 copies since its release in 2006 (OCC). Subscribers can read his story of the song in our Hitmakers feature.

Outside his first band, Burrows has worked on a wide range of projects, including co-writing the BAFTA-nominated soundtrack for The Snowman and The Snowdog and co-producing the soundtrack for David Brent: Life on The Road. He also played drums for We Are Scientists and contributed writing to their albums Barbara (2010) and TV En Français.

Burrows is signed to Warner/Chappell for publishing, and works extensively with Tom Odell, who is set to release a new album this year.