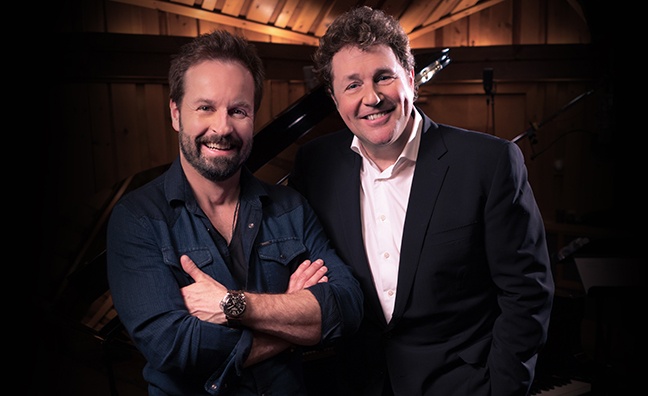 While the chart appeared as usual at 6pm, the processing was delayed by some hours today due to recounting. In the end, Ball & Boe finished on 43,795 copies, ahead of Stereophonics’ 43,760 copies for Scream Above The Sounds. The Welsh band might have been confident of a seventh No.1 album but their first record for Parlophone was unable to hold off the Decca duo, who climbed steadily to finally pass the 'Phonics late on.

Former Music Week cover stars Ball & Boe gained very little traction on streaming (just 149 ‘sales’ in the opening week for Together Again) but the record is shaping up to be a strong seller on CD like their debut, which was the biggest-selling release of 2016. Together debuted at No.2 a year ago on sales of 44,860, and reached No.1 five weeks later.

The duo’s promo campaign for Together Again – including a world record-breaking race across five cities to sign hundreds of copies and an ITV special – helped push Together back up the chart, 181-36. The album has total sales of 611,330, and Decca's president Rebecca Allen will be hoping the strong performance of the sequel means it will have the same staying power up to Christmas. Retailers including Sainsbury's and HMV have already put their faith in the record.

The duo will take to the road with arena shows including an O2 Arena date on December 14. Both Ball and Boe have signed up for solo albums for Decca after this campaign.

As Music Week's chart analysis reveals, it's only the sixth time there has been fewer than 100 sales between the top two this century. The tightest race was in 2009 when Lady Gaga's The Fame finished ahead of Doves' Kingdom Of Rust by just four copies.