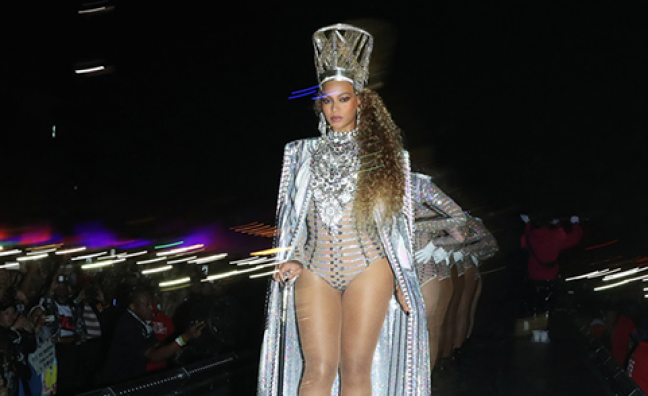 Today (April 17) Netflix released Homecoming: A Film by Beyoncé, which presents an intimate look at the star's 2018 Coachella performance. And to tie in with it, Beyoncé has also released a surprise new live album Homecoming: The Live Album.

Homecoming: The Live Album – released by Parkwood Entertainment/Columbia – has been made immediately available on streaming services, including Spotify, Apple Music and Deezer. This marks a strategic departure from recent releases by Beyoncé who, on Everything Is Love’s track Nice, previously rapped: ‘Patiently waiting for my demise, 'cause my success can't be quantified, if I gave two fucks about streaming numbers, would have put Lemonade up on Spotify’.

Both her 2016 release Lemonade, and her Jay-Z collabo album Everything Is Love (by The Carters) were both initially made available as a Tidal exclusive. Lemonade is still unavailble on Spotify.

Homecoming: A Film by Beyoncé captures the moment the star became the first black woman to headline Coachella, and is interspersed with candid footage and interviews detailing the preparation and powerful intent behind her vision across the space of eight months. The stand-alone Netflix original is now available globally on Netflix.

Speaking about the set, Beyoncé said: “It was one of the hardest jobs I have taken on but I knew that I had to push myself and my team to go beyond great to legendary. We knew nothing like this was ever done on a festival level before and it needed to be iconic beyond compare. The performance was an homage to an important part of African American culture. It had to be true to those who know and entertaining and enlightening to those who needed to learn. In making the film and re-telling the story, the purpose remained the same.”

The film also includes, in the end credits, her remake of Before I Let Go by Frankie Beverly and Maze, a 1981 R&B classic.

Get Me Bodied (With Solange Knowles dancing)

Single Ladies (Put a Ring on It)