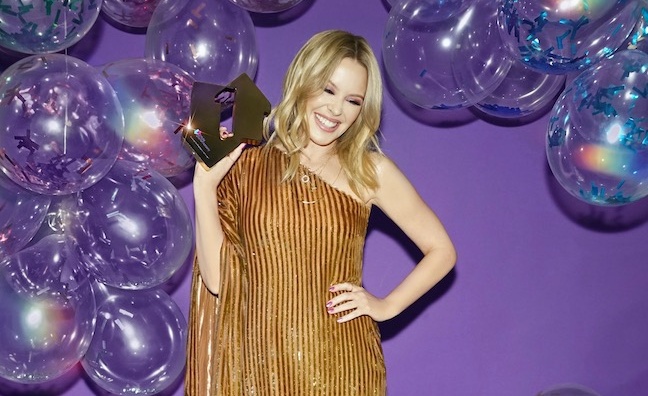 Kylie Minogue has scored the fastest-selling LP of 2020 so far after pipping Little Mix to the albums summit.

The Australian singer's BMG-released 15th studio album Disco has become her eighth UK No.1 with first-week sales of 54,905, according to the Official Charts Company (OCC), following an epic chart battle.

Minogue becomes the latest artist to boast No.1 albums in five consecutive decades, chart-toppers in the '80s, '90s, '00s, '10s and now '20s making her the first female solo artist to achieve such a run. Madonna is the only solo female with more chart-topping albums in total, with 12.

“Over the last three years BMG have been on a journey with Kylie which has culminated today in her third No.1 album with us in consecutive years," said BMG UK president Alistair Norbury. "We are so deeply proud to have played a part in the remarkable achievement of Kylie being the only female artist to have scored No.1 albums across five decades.

"The first week’s sales success is a testament to the outstanding album, made under lockdown, by Kylie and Jamie Nelson, and the stellar marketing plan from Gemma Reilly-Hammond and all her brilliant team, coordinated together with Kylie’s fabulous managers, Polly Bhowmik and Alli Main. Kylie has single-handedly lifted the lockdown gloom!”

Disco edged out Little Mix's sixth studio album Confetti, which itself recorded the highest total for a No.2 album of the year with 49,887 sales. Disco outsold Confetti on physical sales and downloads, while the latter had superior streaming numbers.

Accepting her Official No.1 Award from the OCC at her London office, Minogue said: “Official Charts Company, thank you so much! Disco has entered the charts at No.1! I don’t know what to say, I’m lost for words, thank you to everyone who has supported this album and this campaign, it means the world to me. I’m so touched that it’s made it’s way to your hearts. I love it!”