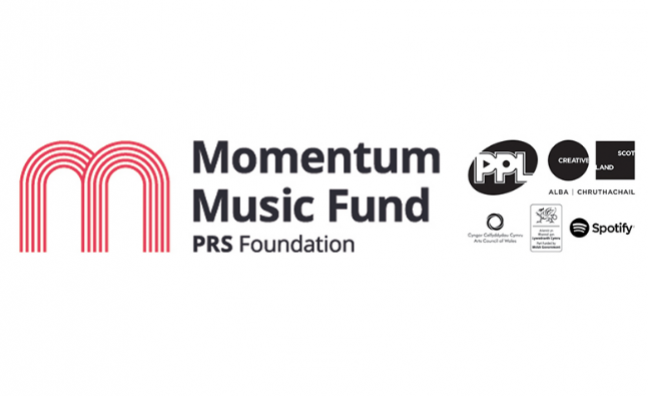 The PRS Foundation has revealed the latest round of emerging artists to receive support from the Momentum Music Fund, with Boy Azooga, Big Zuu, Vukovi and Hookworms among the chosen acts.

This latest list marks the first time Creative Scotland, Arts Council of Wales and Welsh Government are partners for the fund. They join PPL and Spotify, while grant recipients were chosen by a panel of music industry experts.

Vukovi said: “To have the financial backing from PRS Foundation’s Momentum Music Fund really does what it says on the tin. With the success of our debut album building the most momentum we’ve ever had to date, this funding will make it possible to keep that going and allow us to concentrate on being creative and do what we do best. Being fortunate enough to receive this support from the Momentum Music Fund gives us the push to make album 2 a step up from our debut.”

In May at Brighton’s Great Escape Festival, it was revealed that the fund has contributed £13 million to the UK music industry so far, supporting more than 200 artists, over 90 new albums and more than 100 UK tours totaling over 650 UK live dates.

Official digital partner Spotify contributes additional funding and a reward package including promotional opportunities and help from the Spotify team.

Our ground-breaking Momentum Music Fund has had a remarkable impact

Vanessa Reed, CEO at PRS Foundation said: “Congratulations to the 15 talented artists being supported in this latest round. Since 2013, our ground-breaking Momentum Music Fund has had a remarkable impact on the careers of over 250 artists based in England which has generated £13million for the wider UK music industry.  It’s thanks to our new partners in Scotland and Wales that we’ve been able to open up this important talent development opportunity to more music creators across the UK who need seed funding at critical stages in their careers.  I look forward to seeing the impact of the fund’s extended remit in the coming months and years.”

PPL chief executive Peter Leathem commented: “PPL take great pride in supporting the Momentum Music Fund. It is a unique and vital source of income for artists which provides them with the platform to further develop their careers.  Congratulations to all of the 15 artists from all over the UK that are being supported in the latest round.”

Economy Secretary Ken Skates said: “As a Welsh Government we are working hard to grow our creative industries and I am proud to support the expansion of this fund into Wales. The programme will mean our talented musicians can benefit from advice and expertise from some of the biggest names in the business, as well as support for touring, recording and promoting their material so they can take their careers onto the next level.”

Alan Morrison, head of music, Creative Scotland, said: “The fact that two female-fronted acts from completely different genres are the first Scottish acts to be supported by the Momentum Music Fund sends out a really positive message about the music scene in Scotland. Vukovi and Free Love are great examples of the diversity of talent that is currently making such a vibrant noise on home soil, and the opportunities offered by Momentum will take them to the next stage of their careers and out into the wider world. I’m delighted that Creative Scotland can partner with the PRS Foundation to help our musicians catch the eyes and ears of the UK industry.”

Lisa Matthews, portfolio manager at Arts Council of Wales added: “Meilyr and Boy Azooga are brilliant examples of the level of Welsh acts that we’re able to support by bringing Momentum to Wales. It allows us to support artists to fulfil the potential that they’re already demonstrating, to be creative and surprise audiences as well as get excellent advice and introductions.”

Bryan Johnson, lead, artist & label marketing at Spotify said: “Congratulations to the 15 UK artists who’ll receive funding in this latest round of Momentum. We're delighted to be investing in their talent, and providing them with the opportunities to expand their fanbase and showcase their music to our global audience of 180+ million users.”

The full list of artists set to benefit from the latest round of Momentum funding is below:

The next deadline for applications to the Momentum Music Fund is 13 August 2018 via the PRS Foundation website, with organisers interested in receiving more applications from outside London.