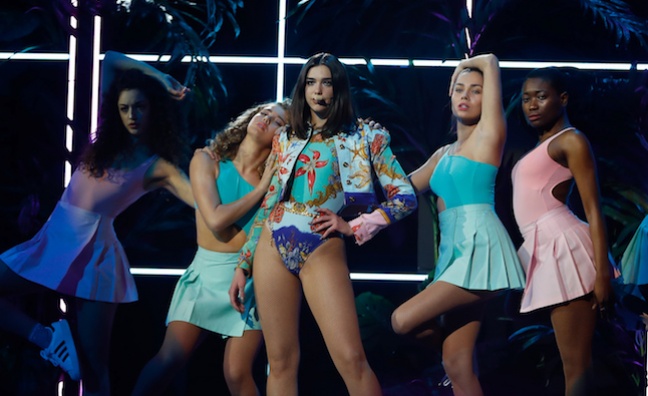 Dua Lipa and Stormzy were big winners at the BRITs this week and both debut artists enjoy a substantial sales boost in the first chart following the televised ceremony.

The sales period for today’s chart (February 23) includes just over 24 hours following the show at the O2 Arena. In the first snapshot of the BRITs effect it’s clear that Dua Lipa – winner of British Female Solo Artist and British Breakthrough Act – is benefiting from her performance of New Rules.

Dua Lipa’s self-titled debut increases OCC sales by 49.3% week-on-week to 9,518, of which a third came after the ceremony. The album has sales to date of 185,030 (of which 80,431 are physical copies), according to the Official Charts Company. The record hits a new peak of No.3 on this week’s chart.

Stormzy stole the headlines with a closing performance featuring a freestyle referencing the Grenfell tragedy, as well as BRITs wins for Mastercard British Album Of The Year and British Male Solo Artist. The grime star’s debut Gang Signs & Prayer increased sales by 88.8% week-on-week (4,345 OCC sales) and moves 41-10 for its highest placing in 47 weeks.

One year on from the album’s release, Gang Signs & Prayer becomes a platinum record this week with OCC sales to date of 302,155.

Ed Sheeran’s ÷ is above both Stormzy and Dua Lipa on the latest chart, but it’s No.2 placing is based on lower sales week-on-week (13,306, down 12%). The album’s sales tally is now 2,850,790 – and there may yet be a sales boost in the days ahead for Sheeran following his performance of Supermarket Flowers.

Justin Timberlake, who opened the show, climbs 8-7 with Man Of The Woods, though a single day’s sales after the ceremony couldn’t prevent an overall decline of 31.3% week-on-week.