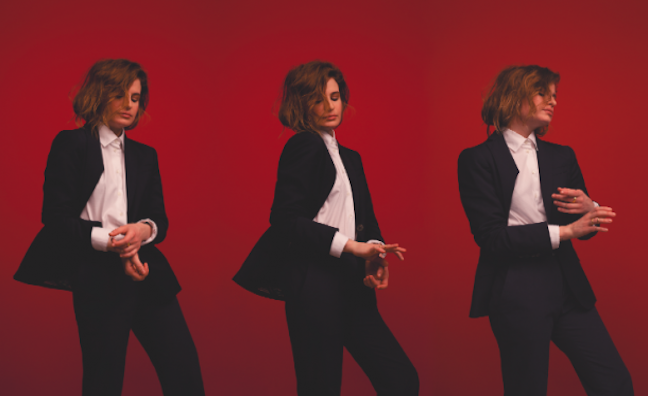 Christine and the Queens' debut album Chaleur Humaine has been finding an ever-growing new audience on UK shores in recent months. Despite being released in alter ego Heloise Letissier’s native France back in 2014, the album has been causing something of a stir since its UK release back in February this year.

Already a big hit internationally - the album has gone seven times platinum in France, with 800,00 sales worldwide - Chaleur Humaine had been steadily growing in popularity in the UK, before a storming Glastonbury performance significantly elevated its profile. So far it has sold 44,217 copies in the and reached No. 6 on the Official Albums Chart last week.

According to Letissier’s label Because Music, her success in Britain has been due in no small part to the fact that she has been able to develop and evolve outside of the UK.

“She became bigger in France than any French act for years,” said Because Music’s Jane Third. “She didn’t have to do her growing up in public here. In the UK we are used to seeing artists in development stages and watching them grow and improve.”

But what has her response been to her newfound Fame in the UK? And what are her plans for the coming months? Music Week caught up with Letissier to find out…

How surprised have you been at how your album has taken off in the UK in recent weeks?

Frankly, I was crossing my fingers for some kind of niche audience that could expect my second album with moderate excitement - so you can imagine how hard it is for me to process that is actually happening. It's mostly thrilling, though - I get to perform in places I loved as a music geek, and for a moment, to be a part of a culture that inspired me in so many ways.

What also feels good is that I'm not really an exotic French artist that no one actually understands, but hey, why not bob along; what I bring with me on stage with this character is the start of really interesting discussions on gender, feminism, music as an hybrid vector. I've been having some really insightful conversations in the UK.

Why do you think the album has connected so well with the British public?

I'm not really sure I'm the one who could answer that question, because it's all about desire, at some point. As an artist, you can try your best to build a coherent project and stay honest throughout; but what happens next (how you're seen, how you're liked) is truly something that is out of your hands.

It's fun, actually, because Christine, as a stage character, was me being unfiltered for the very first time - it was not about being desired, but about being true. Even if I'm one day out of this warm, overwhelming desire, I will continue to be Christine anyway.

Your album came out in France two years ago - has it been frustrating waiting for it to be released internationally? How do you feel about becoming a big star here?

I was not really waiting for my album to exist somewhere outside of France at first; I worked on this piece, hoping it would meet some people and everything that snowballed starting from this very first release has been like a strange succession of incredible bonuses.

A release in the US was made possible, then, a release in the UK. A tour in the US, Madonna spanking me, Elton John calling, a full Roundhouse - it kept on coming my way and at some point I was frantically dancing, as if I was caught in a very welcoming wind.

The very idea to perform there felt like some kind of achievement - such a milestone. It was everything I wanted and more; I wanted the rain, and it rained; I wanted the huge crowd, and there they were; I tried to win them over and hopefully I did.

Big stages work on me like electricity - I feel immense and I feel like I'm disappearing; sometimes I don't even remember what happened during the whole gig.

What are your future plans, particularly with regard to the UK?

Even though I was supposed to take a break and write seriously my second album, I'm considering doing some gigs in the UK - it would be a way to say thanks in person. And bring actual flowers, and give them to you. One by one. Looking in your eyes.