Circa Waves talk launching their own festival 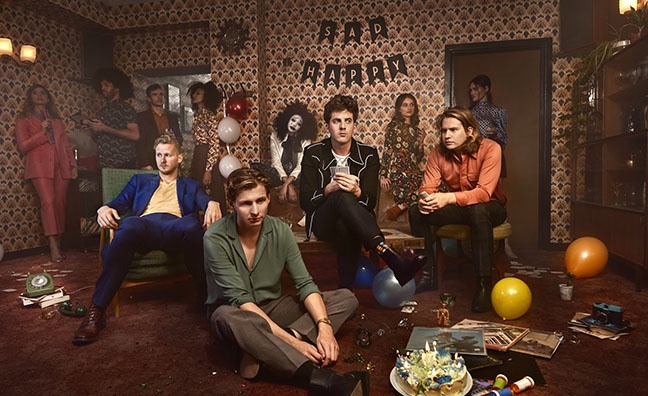 Circa Waves frontman Kieran Shudall has spoken to Music Week about the band's new festival and upcoming two-sided album.

As revealed in this week's magazine, the quartet are headlining and curating their own festival, Circa Fest, in their home city of Liverpool on Saturday, April 4.

"I used to be a promoter for years before Circa Waves," explained Shudall. "I used to work for different companies putting on gigs and stuff, so I love it. It's a bit like being a DJ and picking your tunes, you get to pick and choose which bands [you want] playing. It is going to be really good man, I'm so excited."

Shudall was inspired to come up with the event, in part, by the late Zanzibar owner and Liverpool music legend Tony Butler, who died in 2018.

"Tony was a great person and he made sure a lot of bands got to play their first shows," said Shudall. "Without a venue like the Zanzibar, a lot of bands wouldn't have got that first leg up."

Their tickets are selling faster than ever. It's an exciting time

The band tour the UK in the spring, with a headline date at O2 Academy Brixton scheduled for April 3.

Their live agent Matt Bates of Primary Talent said: "Their tickets are selling faster than ever. It’s an exciting time for an act that we need to cherish in the industry as a truly important artist for modern guitar music."

Circa Fest complements the release of their fourth LP Sad Happy, which drops via Prolifica Inc/PIAS. Split into two parts, the ‘Happy’ side was made available via streaming platforms in January, with the two sides uniting as a full physical and digital album on March 13.

"With the fourth record, we looked at how the hip-hop and pop world moves so quickly, and wanted to try something new," said Shudall. 'We wanted to try a way of releasing two albums so it feels like there's lot of music coming out, but also make it this musical adventure where you get one record and then three months later you get a second record that amalgamates into one album.

"We  thought it was a fun way to do it and  I'm loving it because we got the reaction to one album and then there's still like a second one to come in a month or so."

The record comes less than a year after the release of third album What's It Like Over There, which became Circa Waves' second Top 10 album last April.

“We’ve followed up last year’s album swiftly as we had some great momentum coming off the back of their last album,” said Colin Schaverien of the group's management Prolifica. “Their fans wanted new music and we have a lead singer who can deliver - he’s one of the most prolific writers I’ve ever met. It’s about patience with bands in this current climate, you have to keep chipping away.”