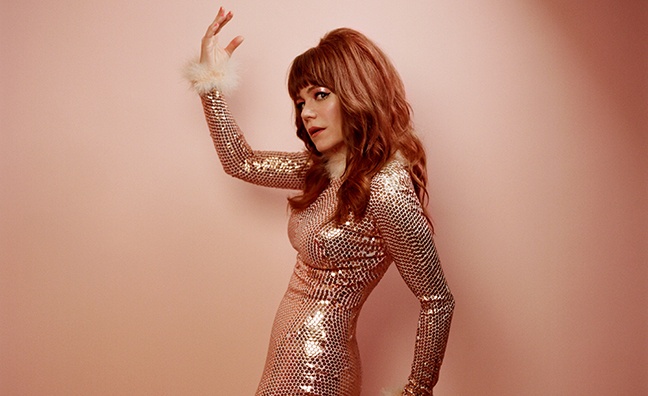 Jenny Lewis hit a new high in the UK last week. The cult artist has released many albums as a solo artist, as frontwoman of Rilo Kiley and as a member of other bands such as Jenny & Johnny and Nice As Fuck.

But it’s her latest record, On The Line (Warner Bros) that delivered her first-ever Top 30 album in the UK, when it entered the charts at No.27, moving 3,155 copies in the process, according to the Official Charts Company.

If it’s taken a while to scale such heights, it’s because pop stardom has never really been on Lewis’ agenda. Yet On The Line features an all-star cast of musicians (Don Was, Beck, Ringo Starr) and Warner Bros – which has steadily built her reputation since signing Rilo Kiley for 2004’s More Adventurous – said it remains confident Lewis’ painstakingly crafted back catalogue is a major asset in the streaming age.

“Clearly for us this isn’t about chasing chart numbers and huge first week sales,” Warner Bros UK GM Jennifer Ivory told Music Week. “It’s rather about continuing to expand and enhance Jenny Lewis’ reputation as one of the pre-eminent singer-songwriters of her generation. Together with her extraordinary backstory, she’s now built up an unimpeachable repertoire of band and solo work over the last 20 years. And we have to be confident that at some point this will crossover to a considerably wider audience. It’s about hanging in there for the long term with artists like Jenny; stay with it, continue to release great music and things will come round in your favour.”

So, Music Week sat down with Lewis in Los Angeles to find out whether the indie rock stalwart is finally ready for stardom…

You’ve had a very long-standing relationship with Warner Bros…

“Yes, I got wrapped into a real lengthy deal there, real early on and I’ve been fulfilling some sort of ghost of Christmas past thing from a past life. (Laughs) But I guess if it wasn’t working, they’d have kicked me off. Why haven’t they dropped me? I don’t think I make them that much money, which is testament to them being nice! There have been so many different people at Warner, there are, like, three people left from when I first signed there. They must look at my name next to some numbers when the new president comes in and they’re like, ‘It’s Jerry Lewis’ daughter, we’ll keep her’. But I’m not losing them any money, not until this record anyway!”

And presumably they’ve been pretty good to you…

“Yes. I have made exactly what I have wanted to make. I’ve never had any pressure to do anything other than follow my muse. When Rilo Kiley first signed to Warner people were like, ‘They’re making their music so mainstream, and look at her shorts, they’re too short’. But no, I’ve never put on anything that I wasn’t responsible for. And to be able to do that within a corporation is pretty fucking cool. I would imagine they probably wanted me to do stuff in addition to the music initially that I wasn’t interested in, like being on The OC or something. But we didn’t do it.”

I may have a little bit of the indie rock self-defeating, foot-shooting thing

Why not? The OC was cool…

“I know but, at the time, having come from an acting background I thought people would be confused and think we were actors playing musicians, when we were musicians. It’s a little confusing when you’re trying to legitimise the most illegitimate profession in the world: being a child actor. People immediately write you off.”

Rilo Kiley were tipped for stardom. Did you deliberately step back from that?

“I may have a little bit of the indie rock self-defeating, foot-shooting thing. It’s just part of the ethos. I should have taken some opportunities, but I acted out of fear that I would have to compromise and not feel good about the music. And that was never an option for me. We could have recorded with any pop producer or written with anyone, but that wasn’t the path. We were mining a different thing.”

How about now? Would you like to be famous?

“I’ve got a pretty good thing going. Of course, I’d like to play at Shepherd’s Bush [Empire] next time, that’d be amazing. But as long as I can make what I want to make and be in control of how things look and sound and feel, then I’m open to anything. But if there comes a point where I have to compromise any aspect of the actual music then no, no way. I don’t want to do any lame shit. I mean, I’ll do all the stuff I need to but hopefully, Field Of Dreams style, if you build it, they will come. When you’re an artist for 20 years, hopefully there’s enough quality and you’ll find your people.”