Ed Sheeran crowned UK's Official No.1 Artist Of The Decade 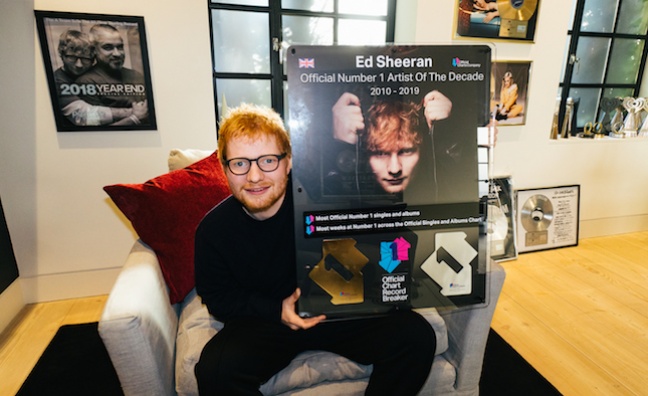 Ed Sheeran has been crowned by the Official Charts Company as the UK’s Official Number 1 Artist of the Decade.

The pop superstar is the recipient of a special Official Chart Record Breaker Award, celebrating the most No.1s (12) across the Official Singles and Albums Chart and the most weeks at No.1 (79) across the singles and albums Chart during the 2010s.

Martin Talbot, CEO of the Official Charts Company, said: “Ed truly has dominated this decade and is a worthy recipient of this amazing new award.

“At the start of the decade, he was a little known (albeit highly rated) young 18-year-old lad from Suffolk - but his catalogue of achievements since then are genuinely remarkable. Today, he is firmly established among the highest level of global music superstars.”

Previous Record Breaker Award recipients include Justin Bieber (the first act in history to hold all Top 3 positions in the singles chart simultaneously), and Sir Paul McCartney as the biggest albums act of all time (22 No.1s).

In addition, Sheeran has scored the UK’s biggest track of the decade with Shape Of You, which spent 14 weeks at No.1 in 2017, and is one of three of his tracks in the Top 5 end-of-decade list, with Thinking Out Loud (No.3) and Perfect (No.5). The full Top 10 is as follows: