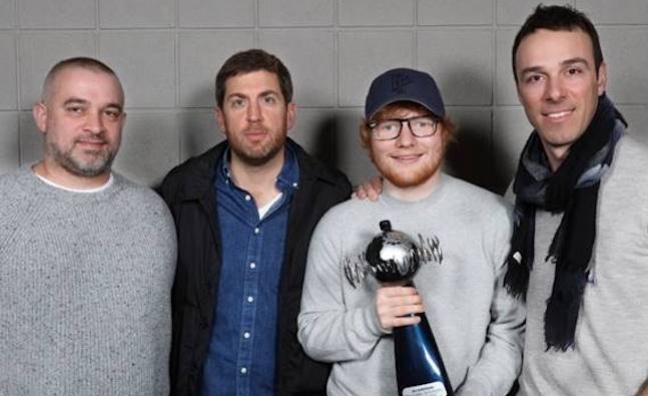 IFPI has officially named Ed Sheeran as the world’s best-selling recording artist of 2017.

The IFPI Global Recording Artist of the Year Award follows huge international success for Sheeran’s third album, ÷, as well as hit singles Shape Of You, Castle On The Hill, Galway Girl and Perfect. The album has already been confirmed as the biggest of 2017 in the US and UK, though the singer lost out in last week's BRIT Awards despite his huge sales.

Sheeran is the fifth recipient of the Global Recording Artist of the Year Award, but it’s the first time that the winner has had both the best-selling album and single of the year. Previous recipients are One Direction (2013), Taylor Swift (2014), Adele (2015) and Drake (2016).

Max Lousada, CEO of recorded music for Warner Music Group & chairman and CEO of Warner Music UK, said: “Being crowned the biggest star in the world, with the biggest song and biggest album, is the result of years of ambition, creativity, and hard work on a global scale. Ed is truly an incredible songwriter, vocalist and performer, whose ability to tell stories and make people feel is what stands him out from the crowd. He’s always had a totally authentic connection with his fans, something he places over everything else. Congrats also to Stuart Camp, the Atlantic teams in the UK and US, and everyone at Warner who contributed to Ed’s amazing success story.”

IFPI chief executive, Frances Moore, said: “It’s wonderful to be able to announce Ed Sheeran as the IFPI Global Recording Artist 2017. The success Ed has achieved is astonishing and testament to his ability to write and perform songs that connect with a truly global fanbase.

“This year’s Global Top 10 really is a ‘who’s who’ of popular music. Each artist has a unique impact on the music industry through the talent and energy they are channelling through their work. I congratulate them all for such a successful year.”

Drake takes second place after a year that saw his More Life mixtape break records for the most streams in 24 hours for an album on Apple Music and best first-day streams for an album on Spotify. Current hit God’s Plan also broke streaming records.